Block Buster is the 89th level in Chip's Challenge 1, and along with Blobnet, is unequivocally on a Most Hated Level list. The incessantly bouncing blocks combined with precise timing, profuse use of [1/2] waits and spring steps, almost impossibly complex slide delay, and many different situations where one mistake sends you packing leads to what is likely a very long work session to even complete Block Buster quickly. Before attempting the bold time to Block Buster, practice the [1/2] wait.

The 402 bold time is one of the most difficult routes to execute that does not use random elements, largely because of the continuous use of the [1/2] wait and quickly changing situations. A simpler 390 solution with the same principles is shown below. A consistent, casual-friendly route took until 2016 to be developed, and this solution is also outlined in detail below.

Run all the way through the three locks, then wait [1/2] in front of the red button and continue 4D [1/2] 2D [1/2] 2D 3R 2U [1/2] and then all the way through the path and over the first three buttons of the second block machine. Wait [1/2] here and then escape through this machine and over the four buttons in the last room. In this machine, you want to push the blocks to reach the exit, but at the right time, of course. Play off the fourth button D 3R [1/2] 2U [1/2] ULU 2R L, and then collect all the blocks from top to bottom, with no further pauses required.

The biggest obstacle to clearing Block Buster casually is the third room, as the slide delay is wildly unpredictable by this point in the level. This consistent solution goes out of its way to clear the sliplist before approaching the third room, which conveniently allows Chip to pass through without having to wait. The fourth room still has unpredictable slide delay, but a mis-step no longer cooks the level, it merely adds time.

Numbering the buttons in the first room from top to bottom, run across button 5 on the way to button 1. Push the resulting block up, and then clone 2 more blocks from button 1. This will trap a block on the single ice tile, which can then be removed from the sliplist with a ram by sliding up column 20. This ram also has the effect of allowing Chip to remove the block on (19, 24) without dying. Clone blocks one at a time using button 2 to bridge around to the green key, using the aforementioned block to reach the red key. After obtaining the green key, loop around the top to reach the chip guarded by green locks: going across the bottom requires crossing button 5, and this would create further slide delay later on.

Pass through the red lock to room 2 and ram the 4th block against either wall: this results in only having to dodge 3 sliding blocks. The slide delay during this part has the blocks mostly stick to the walls, which in turn makes slipping through fairly easy. While sliding back down, push each block up off the ice and out of the way. This will empty the sliplist, giving a clean slate for the third room. To get through consistently, all Chip has to do is run through the hallway at full speed, picking up all four boosts in column 6: this can be done by mashing up in MSCC or holding up in Tile World, however, so it's not too difficult to get through this part.

The fourth and final room of Block Buster will have the blocks bouncing unpredictably, but thankfully a mis-step won't cook the level during this phase. Either use further rams to freeze blocks in place, or walk around each cloner between attempts at removing a block. Remember that even trapping a block isn't immediately fatal either, as the block on button 4 can be pushed up to gain access to another block. A video demonstrating this approach to the level can be found in the walkthrough section. 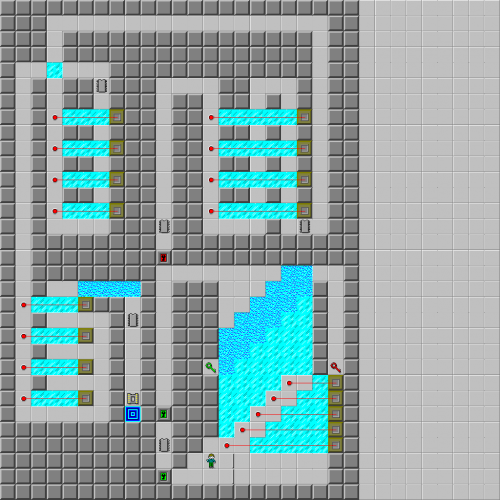