The Controller and Boss Glitch, often shortened to C/B Glitch due to its length, is an MS Ruleset-exclusive glitch that affects the way teeth, bugs, and the paramecia behave when they attempt to exit a clone machine or trap. It is among the earliest documented glitches in CC1, being encountered earlier than even the Transparency Glitch.

The root cause of the glitch is uninitialized variables in the game. That is, some part of the program attempts to read some place in memory without ever writing to it first (or the programmer forgets to write to it first), causing the read data to be something unrelated that was coincidentally written in that place earlier by a different, unrelated part of the program.

In MS rules, when an affected monster attempts to exit a trap, the direction it exits the trap will not simply be the direction it was facing when it entered the trap (as it is in Lynx). Instead, it will be determined by the last attempted direction of the monster directly before it in the monster order (which can be replaced under specific conditions), known as the controller. If the trapped monster is first in the monster order, it is stuck forever. Teeth, bugs, and paramecia are affected by this version of the glitch.

Nothing happens here, since no other monsters exist.

If the walker is ahead of the paramecium in the monster order, and it is pointed east, then when the brown button is hit, the paramecium will move R and DLU, back onto the trap. Although a thin wall is above it, the Concussion Rule does not have an effect on C/B Glitch monsters if their controller points in a different direction.

Here, however, with the walker pointed south, the paramecium moves D and LUR, which will smash Chip unless he dodges.

If the monster list is empty, or if the boss doesn't attempt to move (e.g. a stopped tank), nothing will happen, but if the boss directs the cloned monster in an illegal direction, it also does not clone. If the move ever becomes legal, the monster will immediately spawn in that direction, even if the boss has changed direction.

The bug will not clone in this situation.

With the fireball being the only monster in the monster list, the bug will clone R when its button is pressed. After moving a total of 2R 2U 2L DLD, it will hit the red button and be the boss of the bug it clones, which releases south.

Here is an example in which an affected cloned monster is not controlled by the boss: 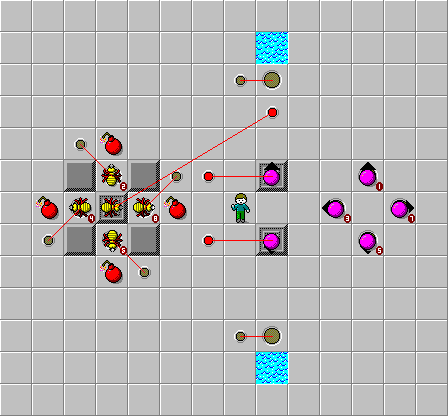 (Note the numbers by each monster indicating their positions in the monster list.)

Also note that, while this glitch determines the direction the affected monster clones in, it does not determine whether the monster clones in the first place, at least in Tile World's emulation of the MS ruleset. For example: 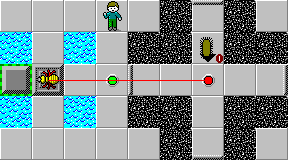 Unusual things happen to bosses or controllers which cannot legally move. A monster stuck in a trap will always work in that direction even when physically trapped (this is frequently used to avert glitch issues); however, when such a monster is released, or any other time one is blocked by acting walls, two categories of exceptions begin to arise.

Monsters that attempted but failed to clone will not count as a possible boss; it is impossible for such a hypothetical monster to be a controller of one that already exists.

Occurrences of the C/B Glitch in CCLP2 are far more rare, since its mechanics had been well-documented by the time of release (2002); only two levels include it.

Accidental cases of the glitch were all but eradicated by CCLP3's release in late 2010, but it is used intentionally as a level element in one case. One new type of the glitch was officially documented in June 2011.