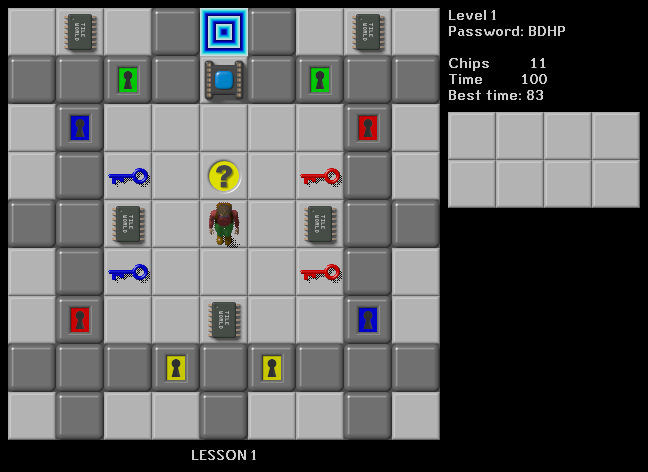 A screenshot of Lesson 1 in Tile World, a well-known emulator

An emulator is a program that seeks to replicate the behavior of other hardware or software. In the context of Chip's Challenge, emulators allow levels to be played more or less faithfully, even without access to the original games (or the systems they ran on).

Emulation has become increasingly important over the years, as the original Windows port — which many community levels were designed for — is abandonware and no longer runs on modern versions of Windows. No official desktop release of the game has ever implemented the Lynx ruleset, either; the Steam releases come close, but make several significant changes to the rules and can't load the thousands of existing DAT levels.

Emulators may aim for compatibility with any combination of the three main rulesets: MS, Lynx, and Steam. The existence of the public TWS and/or solution replays in C2M levels is a great help to emulator development: an emulator can play back many prerecorded solutions in a short time, and the number of successful completed levels is a reasonable indicator of compatibility.

Not to be confused with, which are games that take inspiration from Chip's Challenge, but don't have compatibility as a goal. A decent litmus test: if a game can load user-provided levels in a Chip's Challenge format (DAT or C2M), it probably qualifies as an emulator.

Tile World is the gold standard emulator; it has near-perfect accuracy with both MS and Lynx, and it's the only emulator considered scoreboard legal. It's open source, cross-platform, and comes with its own CC1 tileset (which frees it from copyright concerns).

Unfortunately, Tile World emulates neither Steam rules nor any elements introduced in Chip's Challenge 2, making it incompatible with the current "canonical" releases of the games.

Accuracy is a subjective measurement. Five stars means scoreboard legal, except for SuperCC, which cannot be played in real-time.