Difference between revisions of "Teleblock"

Teleblock is the 14th level in Chip's Challenge 1. Here, Chip collects the red key given for free (due to boosting, D >LRL D is [1] faster than 2L D), teleports to a second room, and uses it to open up four rooms of blocks, which replenish the keys, and then use the eight blocks to reach the four chips in a third room, two blocks a chip. The level has a couple of tricks to it; the red lock on the right does not have a red key to replenish the used key, requiring it to be the last room opened, and Chip cannot follow the blocks directly himself or with another block because that would push them into a corner.

The 204 route requires Chip to enter the water room only three times, pushing two blocks in the first time and three the next two; because only one block can enter from the north lock, Chip must push the lead block 2D, then the rear block 4L, to collect another red key and open the west side to add a second block. Teleport >U and attack the southeast chip, then slide >LRLRL, teleport a block east and repeat the same 2U/4R maneuver below such that Chip can access the east side for a third block. Slide >D and move clockwise to remove three water spaces, but leave the fourth block alone until after the remaining north, east and south blocks are pushed in, such that a slide >R will allow Chip to collect all four chips at once, ending in the northeast. Jump south into the exit and leave. 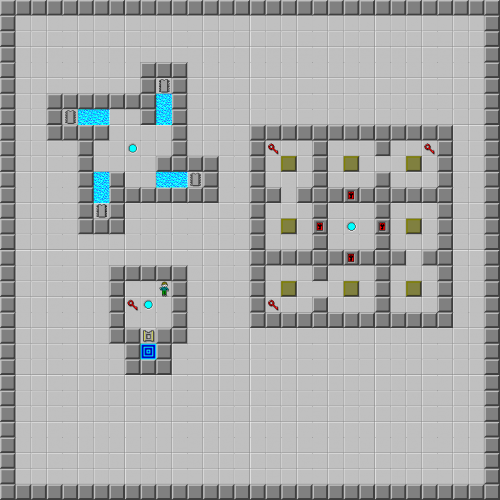