Chip Alone: Lost in Chip City is the 75th level in Chip's Challenge Level Pack 3. It was created by Tom Patten. The title and the level were inspired by the film Home Alone 2: Lost in New York.

Run right to escape the fireballs, press the green button and push the block to the right and up into the water (the lower fireball will get trapped on the trap above). Explode the bomb, hold down both trap buttons above, and clear dirt so that the fireball will go into the fire. Now release the fireball using the nearest brown button, and step on the cloned block as it enters the water. Go back and release fireball 1 from its trap and immediately push the block up into the water. This fireball will get trapped between two toggle walls – push the green button to release it, then release it from its next trap, which will send it through the teleport. Pick up the red key, open the red door, and push the block immediately above it into the water to the right (fireball 1 will be coming along this path). Move to the right of the blue button and press it as the fireball moves to 2R from the tank (the fireball should now be let through and get stuck between a force floor and a toggle wall). Explode both of the bombs above to clear the path. Press the brown button nearest the fireball (this will release fireball 2). Go back and press the green button 3 times, then press the 2 brown buttons (bottom one first) to the left of the last brown button pressed. Go down the ice and wait for the fireballs to explode the bombs, allowing the chips to be collected. Go through the socket, into the teleport, collect the fire boots, and walk to the exit (sliding across the teleport for a slightly quicker route). 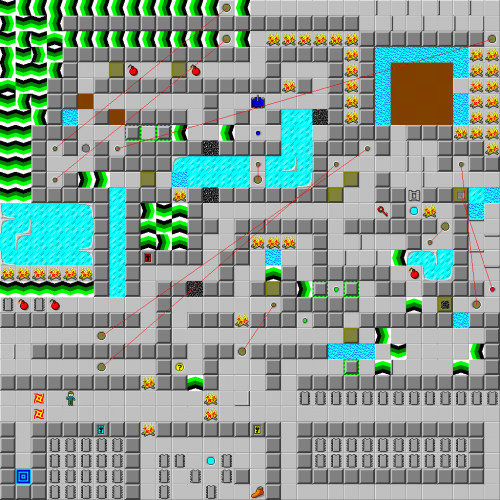