Odd and even step

(Redirected from Odd step)
Jump to navigation Jump to search

The rules for the movement of teeth, as well as blobs in MS and animation delay in Lynx, are governed by the principles of odd and even step, and are vital mechanics to understand at many levels of Chip's Challenge play.

In MS, Chip is always given one free turn at the beginning before any monsters move (unless the Time Dilation Glitch is triggered, which is generally not triggered in active play). Odd step happens when teeth and blobs move on the second turn, and even step happens when they move on the third turn. This single move can cause either just the same single-move difference, or being clear on the opposite side of a level, after playing the same route. Note this in the example image.

In most levels where teeth and blobs can interact with Chip in some way, either initial setting will produce a higher result than the other, whether it be simply [1] added to the route as part of an extra second or mere icing on the cake, or even far more if the placement affects other sections of the level. In level guides, it will be specified which algorithm is preferred or required for the solution.

Using odd and even step[edit]

For exploiting such occurrences, Tile World is generally preferred, because simply pressing O allows the player to manually toggle the modes at the beginning of a level. In versions 1.x.x of Tile World, the word (odd) will appear next to the time limit when odd step is selected, and will remain there the entire time the level is being played; in Tile World 2, however, the word odd-step will appear below the hint box and will not remain there for the rest of the level, as the same box is also used to display onomatopoeia of game sounds when the game's volume is set to 0. In MSCC, however, because of the continuing clock counter, the algorithm is harder to control. The CC window will always begin in even step, so it is easy to select even step. Odd step is much harder to select, since it depends on the player switching over to the desired level exactly [1/2] after the clock ticks - not enough to cause the clock to drop, but enough to cause the level to begin on an odd move.

MSCC users can use Fullsec to easily toggle between odd and even step, but it is harder to use than Tile World's control. The F5 control will start the level, unlike the O control, such that unless initial waiting is required, the level has to be started again. Odd step in Fullsec can only be detected by looking at the Best Times submenu, whose U is capitalized during odd step mode.

In Lynx, there are 8 step parities. The "new" step parities include even+1, even+2, even+3, and their odd-step counterparts. These exist between the usual even and odd steps; a full cycle through the parities still lasts 2 moves. In Tile World, pressing the O key will still toggle odd and even step, skipping the +1, +2, and +3 parities, but pressing Shift+O will advance one step parity at a time. This can be used to more precisely control teeth, which attempt to move on every even+x tick and not on any of the odd+x ticks, but not blobs as they are unaffected by step parity in Lynx. It is also useful in controlling animation delay, as its duration is actually dependent on the current step parity.

In CC1's Steam re-release and in CC2, there is no way to change the beginning step parity; levels always start in the equivalent of odd+1 in Lynx. Animation delay is no longer step-dependent, lasting a constant 6 ticks. In all other aspects, parity works the same way as it does in Lynx. Floor mimics move on every second teeth move, i.e. on every second set of even+x ticks. 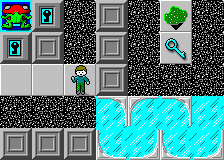 In this mini-level, the time limit is 20. The blob is restricted between U and D forever, and guards the blue key. To exit, Chip must snatch the blue key, then open the blue lock at (0, 1), on the teeth's moving turn, in order to free the exit. Chip must then lure the teeth just out of the way to reach the exit before getting eaten.

The fastest way is in odd step, as after sliding on the ice and moving L, Chip now has to wait only [1] before getting the key (also avoiding the Transparency Glitch), instead of [2]. Now, Chip can collect the key, slide back, and open the blue lock without waiting. Now, move (2D 2R [3]) U to exit, with 15 seconds remaining. Waiting [4] would allow the teeth to match Chip's second L move, rather than the first U move, and he could not escape in time; waiting only [2] does not put the teeth on (2, 2) at all. As this route is a 15.0, using even step will only score 14.