Potpourri is the 55th level in Chip's Challenge 1. This is a rather generic potpourri, but it's still fun to play around with. It also makes for a rather easy but entertaining challenge with the typical tricks to it that raise the difficulty slightly.

The chip visible at the start is untakable, so be on the lookout for one extra chip and leave behind the one that takes the longest to get. The chip behind the bomb is not that one, so use the block to collect it. (Chip could use it to bridge faster to the blue key, but Chip would lose that time anyway.)

Now, take the blue key and fire boots, pick carefully among the walls below, and especially be careful of the blocks: two blocks have thieves under them, and you need the fire boots. Also, watch out for another hidden wall above the fire.

The ice section requires perfect boosting (chip 4 in the ice section is the one that should be left behind), and boosting is not something a guide can teach a player to do. The pink ball section can, however, be taught by an AVI guide. As Chip can see, there's a hidden computer chip under the block he pushes. 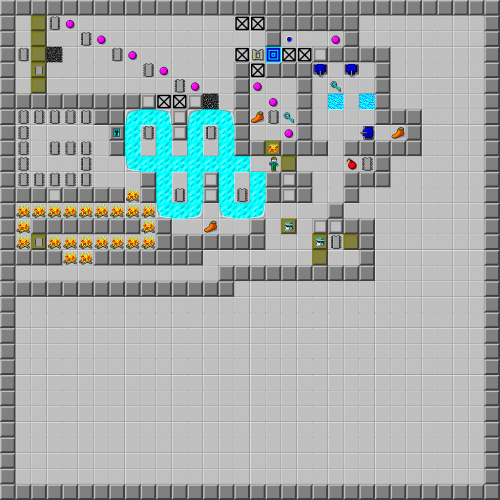