Rock is the 20th level in Chip's Challenge Level Pack 3. It was created by Craig Vilbig for his WebCC set (Quasar Industries), and though not intended for original Chip's Challenge play it was copied into his third levelset (The Last Few Chips III-1: Consequences). Vilbig had intended to only use the level as a test for fireballs on WebCC, but the level seemed good enough to include in an actual levelset. Though Craig himself has stated that it is not one of his favorites, he also appreciates that it was voted to be in CCLP3.

Wait the free [1] plus another [2] at the beginning, then move the initially visible block 3 DR to deflect one fireball into a bomb and circle block 1 around the northwest edges, then leave it 2L from the yellow lock and, while waiting for a fireball to hit it and touch the red button, move block 3 east towards block 2. These blocks will combine against the bomb and water to collect two keys, while the dead fireball exploded a bomb and block 1 will follow behind into that water space for the other two.

While pushing this block south, divert directly west and take the chip using the east trap; the two green buttons are unnecessary, though they would have both been used if the other trap had been the one open, as one would free the chip and the other would then open the exit back up. (Extraneous constructions are rare in CCLP3.) With all five items collected, trek north into the exit.

The title refers to the common phrase "stuck between a rock and a hard place," as the player must use the blocks to guide the fireballs - and not to Rock Genereux. Potential for such confusion is one factor in why references to official CC levels became either bolded or converted to digital notation. 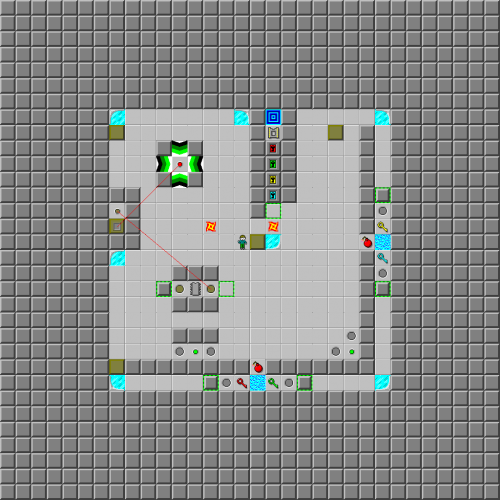