The exit is the tile which Chip must step on to advance to the next level. Every level is required to have at least one exit, but each exit has the same effect. In almost all levels, the exit is heavily guarded by obstacles that Chip must defeat. Some of the common obstacles may include sockets, monsters, or locks.

Monsters cannot step on the exit, but blocks can be pushed onto the exit; on occasion, the exit will be under a block, but it occurred only once in CC1: at the very end.

When Chip steps on the exit, the clock stops after the time spent on the last move to the exit is ticked down, plus one more turn in Lynx. A window looking like this: 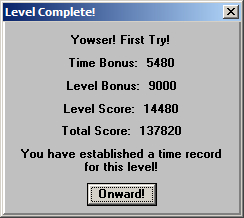 pops up, which totals up the time bonus and level bonus, and adds them to create the level score, which will be added to the player's total score if it is a newly completed level, or else any difference between the current and previous time/level bonuses will be added to the score. See Chip's Challenge scoring for how the scoring works.