Difference between revisions of "Stratagem"

Stratagem is the 142nd level of Chip's Challenge Level Pack 4. It was created by Derek Bowser. The difficulty of this level comes in trying to figure out how to use the block to get the bug to explode the bomb, while also using the block to get the chip to the north. This puzzle can be fairly tricky for the new player to solve without external help, as it involves some pretty outside the box kind of thinking.

The bold route for the [Lynx|Lynx ruleset]] requires you to push the block into the bug trapped in the upper right corner of the starting room right before it moves down, which causes the bug to immediately reverse and head into the toggle room, at which point you then need to follow it in the hit the switch to allow you to get the chip in the top room using the block. You then have to go back into the toggle room to hit the toggle button as the bug is heading on it's way to the right-most wall, which allows you to exit the room and go all the way into the upper-right corner of the bomb room to wait for the bug to blow the bomb up, at which point you can exit the level.

There are several waits in the route. The first is after you move the block and hit the toggle switch for the first time. After that, you move R[2], and then move left into the center room with the block, stopping right in front of the door to the water room. The second wait in the Lynx bold route is right in front of the socket, which is [1.5]. 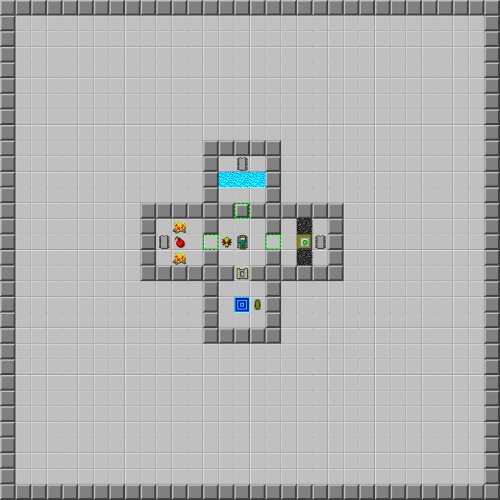