Block Head is the 45th level in Chip's Challenge Level Pack 3. It was created by Grant Fikes.

404 route: Push the two movable blocks across the water, and walk round the water and along the bottom of the level to reach the next room. Push all 3 blocks onto the trap buttons, cross the traps to push the other block into the water, then return and push the original 3 blocks into the water. The next stage involves collecting 10 yellow keys by pushing blocks across water and crossing fire. Due to the thieves, only one block can be pushed at a time (all the blocks have fire boots under them). The block immediately below the 5th yellow key has to be pushed all the way down to the bottom of the room, and then back up (using the ice). Now go through all the yellow doors and push these 7 blocks across the water. Collect the red key, which is used to unlock the 3 blocks at the start. These blocks will hold down the trap buttons, allowing the chips to be collected (each button controls the trap in the corresponding position). First hold down the bottom 3 traps, then the middle row of 3 traps, then the top 3 traps (collecting the relevant chip each time). Now press the green button then hold down the 3 traps on the right, then the middle column of 3 traps, then the 3 traps on the left (collecting the relevant chip each time). Finally use the 3 blocks to bridge to the exit. 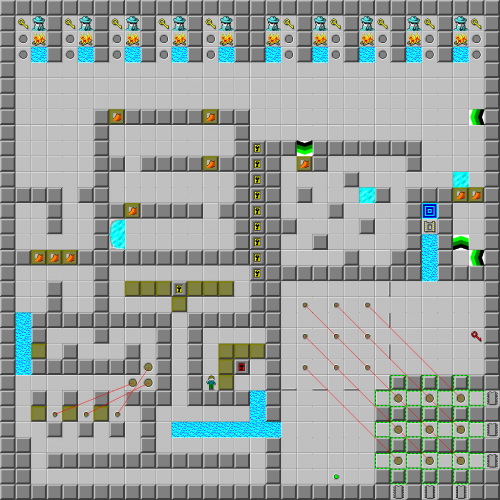