A trap, often called a bear trap and called this by Melinda, is a tile that restricts any object that steps on it from moving. The only way to release the trap is via a brown button that is connected to it. When a trap is released, it is termed open, and when not released or not connected at all, it is closed. Note that this terminology does not describe the graphics in Chip's Challenge 2: the teeth of the trap appear separated and "open" when it would be called closed, and vice versa.

In MSCC, if running with the black and white option, a trap appears as a black circle with a T on it to let the player know it's a trap.

More than one brown button can activate the same trap, but only one trap is released by one brown button; only the first trap a brown button is connected to will be released. To change trap connections, either disconnect or reconnect them (in ChipEdit), or go to the "Trap Connections" menu and disconnect the tiles (in CCEdit or CCLD). In the DAT file of the Microsoft port of the game, the number of connections is limited to a maximum of 25 per level.

When the appropriate brown button is read as pressed (see Button Smash Glitch), or if it starts on the lower layer, the appropriate trap will allow any object on it to move, although MS rules allow objects to remain on an open trap. An open trap allows monsters not affected by the Controller and Boss Glitch[1] to exit in their facing direction[2]. An object that falls into an unconnected trap remains there for the duration of the level, since there is no way to open it.

Traps on the lower layer[edit]

If an unconnected trap is on the lower layer, it will still trap Chip and blocks that run onto it and be erased by monsters. In the case when there is a connection, the trap will not work on Chip when revealed, and will allow Chip to move onto the square after a block in exchange for being trapped himself. Normally, this is not permitted, as covered in the next section.

Although blocks can also be trapped in traps and released, they become acting walls until the trap is opened. If a block slides into a trap, the block will slide an additional space in the direction it was sent in when it is released, because it is still on the sliplist for one further move. This can be seen in Torturechamber.

Even though they may not be connected to anything, traps can often be used to ensure specific monsters that fix the Controller and Boss Glitch stay facing a certain direction, and can even appear as special types of "walls" in levels such as Strange Maze.

In Lynx, an open trap forces an object that touches it, whether it stepped into the trap while it was open or closed, to slide across it akin to an ice tile[3]. Although there is no sliplist in Lynx, Torturechamber can still be solved there because of this mechanic: the block, when released, will move L a second time and elicit the same result as in MS.

By contrast, this loss of flexibility can be detrimental to Lynx compatibility, as in the following short: 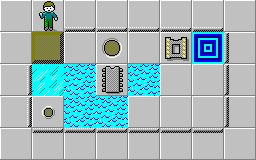 In both rulesets, Chip will move D to send the block sliding onto the button and 2R into the trap. However, in Lynx, Chip is automatically slid horizontally from either side of the trap, such that he cannot reach the computer chip. In MS, Chip can simply move DU to pick it up.

The speed at which an object slides through a trap is affected by both the tile Chip is entering and leaving, for each trap Chip is moving into or out of, it reduces the time taken to enter/exit a tile by 1 tick per trap (for a maximum of a 2 tick reduction). However even a line of open traps will still only allow an object to travel as fast overall as an object on ice.

In Steam open traps are acting floor and as such are not affected by the Concussion Rule, breaking levels such as Nightmare (which had to be changed for the Steam release of CC1) as such. However any object that enters a closed trap will be ejected in their facing direction (if possible, otherwise they act normally) if the trap is opened by a brown button, a wired trap will behave as acting floor when opened.