Chchchips is the 26th level in Chip's Challenge 1. This level contains one hundred and seventy chips, which leads to its title, and importantly introduces the paramecium, which patrols the chips in the middle of the level. The paramecium is following the chips, which make it rather difficult to snatch the chips. The way to do this, and in similar situations as well, is to wait for the paramecium to be one space diagonally from Chip, following against the item that Chip wants to collect, or in some cases a block Chip wishes to move; since involuntary monsters are before involuntary Chip in move order, it moves another space towards Chip while the item is taken, leaving the monster in a circle.

Also, the lower left of the level houses a trapped pink ball that will eventually be released with the collection of its chip, to begin cloning teeth. The simplest method is to leave this chip until towards the end, but it can be taken in normal play with carefully considered conditions, as teeth suffer from the Controller and Boss Glitch: they are slow to clone and can sometimes block each other from cloning, magnified by the pink ball boss' exclusively horizontal movement. With enough chips taken out of the main room, Chip can lose the cloning teeth in the east of the level and underneath the overhang spanning two columns west of the clone machine, such that they do not chase Chip until he returns to the beginning to exit safely.

Play this route in even step. The bold route starts off by travelling down along the left wall, collecting the chips in the recesses of the walls until you reach the last chip in the recess of the second wall, then travels back up and moves right through the second to last line of the center chip section. Once you hit the last chip on that line, move LUURR and then follow the line of chips down until you hit the middle of the bottom line of chips.

From here, move right until the end of the line of chips, and then travel back left until the chips end, where you then move LDDL[2]DULLURULLDDDD and then right all the way until the teeth clone block. Once you hit the teeth clone block, go URRD and then right until you hit the toggle block, where you move through the toggle block and take the first chip on the right and then move back left and up through that section of the path, before heading down and left until you collect the last chip on that path.

You will then have to immediately move left, otherwise, the teeth that is there will kill you. Travel back the way you came through the toggle block and head north into the first pink ball room, where you move to the first chip on the right wall and then move down to collect the solitary chip before heading back up collecting the remainder of the chips on the right wall, then head left and down until you hit the wall.

Once you hit the wall, either move UD and then continue right or [2] and then continue left straight through the chips in the second pink ball room. This leads back to the center chip segment, where you then continue left until you hit the first chip in the downwards line of chips. You will then move DDUUUULLLL[1] waiting for the paramecium to pass by. You then move down and collect those chips in that line and then move straight up, collecting the second chip in that line. From there, move left and then right along the same line until you collect the last chip, where you will then have to immediately move up. If you do not move up immediately, the paramecium will kill you.

You then continue to move up until you intersect the line of chips on the top wall, where you then move right until you collect the last chip in that direction, and then move left all the way into the exit.

Dear Chip, I stutter with excitement when I think of the 170 chips I left in this area! Timing is important. You'll no doubt run across, or be run over by, my pet paramecium. He's been all alone in the lab for too long. You'll have to move fast to snatch the last chip away from him. I expect you might be trampled a few times, but believe me, Chip, it can be done! Apologetically, Melinda 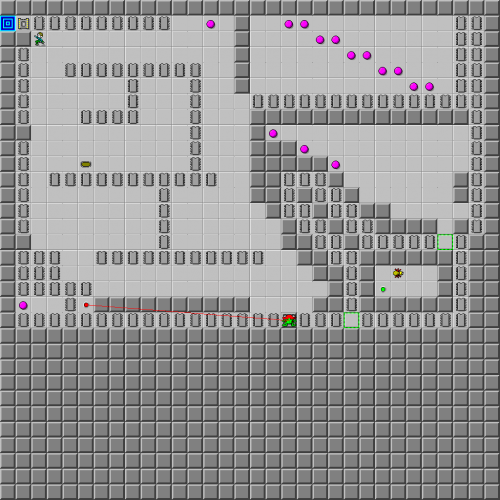