Cypher II is the 34th level in Chip's Challenge Level Pack 2. It was designed specifically for CCLP2, as the original version of the level in Dale's set was significantly different. It is obviously named after the original Cypher, and there is a cypher in this level as well.

However, that cypher is harder to determine, less useful, and the level that contains it is flat-out hard. In fact, a level map or AVI is probably going to be necessary to do it. Fortunately, both a level map and an AVI are provided below; however, the bigger clue is that when complete, the four sections of Cypher II contain four letters: 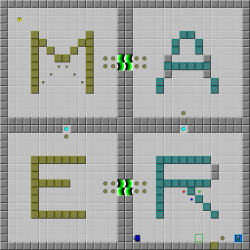 which spell out a password that will allow the player to go directly to level 145, Gauntlet.

Cypher II has numerous invalid tiles, such as items buried under dirt or blue walls. In CCLXP2, these items were simply moved to the upper layer, meaning you only have to step on them once. This along with trap sliding are what is responsible for the abnormally large difference between the MS and Lynx bold times, a total of 12 seconds.

Additionally, the ending area works differently in Lynx than in MS. In Lynx, simply pressing the green button will cause the tank to make its way to the brown button; however, in MS, the blue button must be pressed twice before the tank starts moving. This cannot be done until the red button is hit, and then the player must release the tank from the trap it gets stuck in. To emulate this, CCLXP2 places the offending tank in a trap that is only opened when the tank button is hit once.