Glut is the 39th level in Chip's Challenge 1. It has the shortest time limit in any Chip's Challenge level pack and is the second-quickest solve at only 2.8 seconds - the fastest being Maze of One Way and the third being Lesson 8. Chip can simply move to the center and exit with a 14 time, or as suggested by Melinda's special dispatch, enter one of the exits guarded by teeth:

Dear Chip, If only we lived in a more perfect world. The bad news is I posted 12 terrible monsters here to guard my chips from spies! But the good news is you only have to make one of them chase you. My advice: Be ready to run and know where you're running to. I hope the monsters don't kill you too many times. Hopefully Yours, Melinda

The idea is to draw one of the teeth out, as the rest won't move because of the computer chips under them, then lure that specific teeth just out of the way and collect the chip in front of the exit on their moving turn. The given solution uses odd step for a 17.2; either the north or west edges work the same way, and the third chip instead of the second on either side can be used with even step for a 17.0 route. 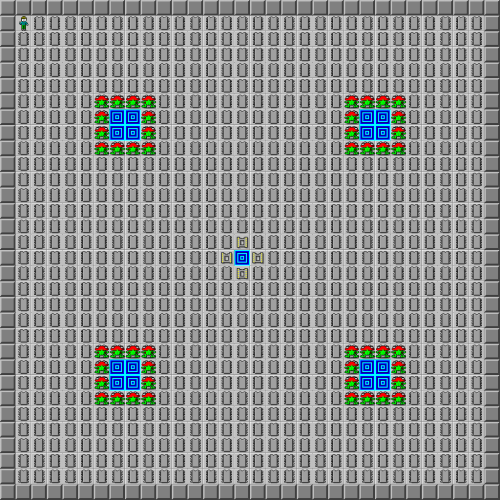