The Headbanger Rule is a law of mechanics in Chip's Challenge, concerning Chip and sliding blocks. It is best known as the reason behind block echo.

When Chip is sliding on the same line as a block, Chip cannot push the block in the direction that the block is already moving. Normally this would be impossible, since the block begins sliding one full turn before Chip does; however, circumstances such as Chip boosting or the block suffering slide delay may make the block be within one sliding square, such that Chip attempts to move before the block does. Note that if the block has been pushed into a teleport, boosting is the only way to trigger the Headbanger Rule, since there is no slide delay through teleports.

Chip is blocked as a result, such that he slides backwards and block echo occurs. This is typically inconsequential on force floors - only [1/2] is lost - but on ice, slide delay can slow the block down a long way down the path such that Chip slides all the way back the way he came.

Cross-checking occurs because the Headbanger Rule does not apply when a block is turning. Chip steps on the block's square after Chip's Challenge commands the block to move in the second direction but before the block can actually move.

Normally, even though he may be sliding on force floors, Chip is not allowed to move voluntarily after he hits the block, as Chip's Challenge initializes Chip to continue sliding quicker than Chip can react.

However, when Chip performs a spring step such that the second move runs onto force floors while pushing a block, and triggers the Headbanger Rule, he can move voluntarily within the next half-move. This method was discovered by David Stolp and put to use on Flame Boy, as shown in the diagram below: 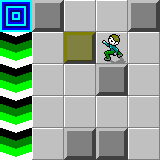 When Chip reaches the point shown in the image, he will continue pushing L, and then wait [1/2] before the final moves of 2L U. If he moved 2L with no wait, the block would move before Chip at [0, 1] and the block at [0, 2] could make contact. However, the spring step brings the block and Chip a half-move closer together, such that they connect during this 1/10 of a second, and the Headbanger Rule applies. The U move, if played immediately, will then move Chip to the exit. (If Chip were to wait [1/2] further, then Chip runs into the block and the block moves during this turn, and on the next half-move, Chip would slide after the block.)