Cross-checking is a term for several related behaviors, usually related to a generally unintended block push over an ice corner due to either slide delay, boosting by Chip, or even a combination of the two.

The most common instance of cross-checking is when a block is sliding and comes to an ice corner as Chip is sliding exactly one space behind it. This is typically an accident, and is usually discovered originally when first playing through Iceberg. In the shown AVI autopsy from a playing of Iceberg, the third block was pushed on the ice as Chip boosted, and it lost [1/2] against Chip as a result. Chip moves before blocks do while both are moving at 10 m/s, so he pushes the block over the ice corner and continues sliding to his death in the water. Slide delay can also make the block slower, rather than boosting making Chip faster, and cause cross-checking; in the absence of either, a spring step before pushing the block onto the first sliding tile can work.

The block will be squeezed over the ice corner to the opposite side only if this is legal, and be rammed into the ice corner if not (as figures strongly in Manic Depression); Chip will continue sliding along the ice in the former case and deflect backwards in the second. This is required to solve Two Sets of Rules under the MS Ruleset, and serves as a demonstrative example. 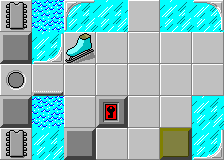 Here, Chip after arriving at [4, 0] must push the block R 2U L on solid ground and maintain a holding west move to boost behind the block as it moves towards the ice corner; the block will then drop into [1, 0] and Chip, after collecting the ice skates, can then skate onto it to collect the chip accessible in MS.

Normally, the Headbanger Rule would prevent the block from being pushed at all, as Chip would instead deflect backwards due to block echo, but this law is ignored in this situation only, as ice corners are programmed to be ignored when buried under anything; if any object starts a level over ice corners, it can step over them. The block is already committed to turning before the ice corner is ignored, so a block's normal sliding is unaffected; cross-checking happens when Chip attempts to push the block before it can move, which can only happen when the block slows down or Chip speeds up.

As a logical consequence of the Headbanger Rule, cross-checking can only occur when the ice corner is the second sliding tile in a straight line; any more than two and the Headbanger Rule executes before the block reaches the ice corner, and only one space does not give Chip enough time to catch up to the block before it leaves the situation where cross-checking can occur, even with a spring step. Although Chip will be [1/2] behind the block in the latter case, a sliding block moves before a voluntary move by Chip, in contrast to where an involuntary move by Chip precedes a sliding block's.

Although cross-checking is in itself rare, and ice cross-checking takes up the vast majority of cases, it is also possible for blocks to be crosschecked sideways over force floors. (Attempting to cross-check a block backwards results in death.) This works the same way as ice cross-checking, as all three possibilites are open:

To avoid cross-checking, wait [1/2] before following to give the block its two-space lead, or longer if slide delay is present. Even if there are no ice corners, block echo may remain an issue, particularly in very congested sliding traffic where several blocks are going to begin bouncing and shake up the sliplist.

While a crosscheck can often cause Chip to either die or have to restart the level, some levels can actually use this technique for good, as shown in the initial example which famously stumped several new Chipsters. David Stolp's bugs also requires Chip to crosscheck several blocks to get them into specific water spaces, in order to reach specific areas of the level.