Hurry Up, Chip! is the 46th level in Chip's Challenge Level Pack 2. Cheerily named, Hurry Up, Chip! is a notably hard challenge without a level editor, due to two multiple-choice landings and a hidden wall maze with cloning fireballs approaching Chip from behind.

Follow past the glider, step over the trap which a ball will release for Chip, and then move through the maze and (4U 4L 2D 2R) to the level's chip. The paramecium in the pink ball room will bounce back, so move L to avoid it. After this, wait for the ball, then run up and take dirt 1 for fire boots, and move through the fireball mazes.

Eventually, Chip will reach a large open space, which is actually full of hidden walls; play 3D across the east wall, then 2L U 2L 3D 4R 3D 6L 5U 2L 4D 2L and down to a choice of force floor strips. Among the first five, four lead to teeth, which Chip cannot avoid once he steps on the strip, and the next three all lead to suction boots guarded by another teeth. Move onto strip 3, then follow to the west and exit. 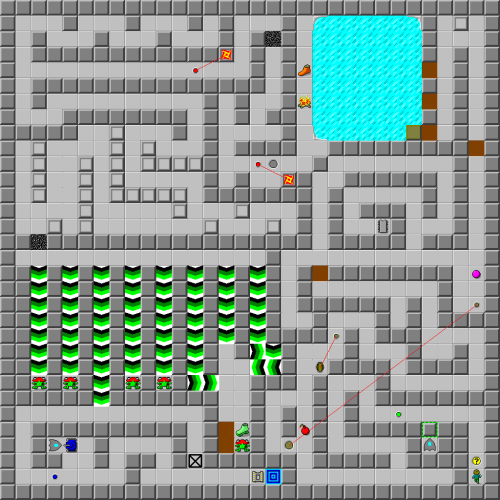