Tele-Rooms is the 47th level in Chip's Challenge Level Pack 2. This level contains, of course, the four tele-rooms, then a section on the right, and finally the key section. Chip cannot exit by starting on one; he must return to it. As pointed out in the hint, that is the only exit; therefore, Chip must collect suction boots. However, if Chip collects them directly, he is blocked on the way back out by a hidden red lock and blue lock, and there are no loose monsters which can erase the hidden locks. Chip must, therefore, find the two keys.

While there is minimal difference whether odd or even step is used, the possibility of causing two more of the blobs in the southwest to drown is worth using even step for. In odd step, the monster order blocks the blobs from entering the water on their first turn, at that moment occupied by gliders. Once they start sliding, they are stuck on the ice, and can cause problems when Chip is trying to move through the area.

Teleport down, take the two chips on the top, then take the ones past the hint in a circle in either direction, and finish this room. Use the force floor to move into the next; collect the chips in this room counterclockwise from chip 2 and wait [1] for chip 4. Now, teleport north, out to the east, and steal the fire boots from the blobs. Go back to the previous room, take the four chips counterclockwise, then teleport north and take the northeast chip, and use the force floor to collect counterclockwise. This ends the chips; move to the sliding pink balls on the left. Depending on slide delay caused by the initial moves of the blobs in the lower left corner and subsequent sliding, Chip may have to play U or D in order to take the keys in order, but neither of these lose time.

With the yellow keys collected, move further down the west side and enter first the corridor to the right, swapping fire boots for flippers, and then the one past all the yellow locks. Collect one row of keys, then unlock the blue key to the right, and on the way back over take the second row. Use these keys to take the red key, then use both keys to collect the suction boots, and then >UDU in the southwest room to return to the exit.

The hidden locks and sockets, plus a water buried under water at (5, 27), make Tele-Rooms unplayable in Lynx. CCLXP2 removes the offending water and moves the hidden locks to the upper layer. To deal with the hidden sockets, they were moved left or right from their original positions and recessed walls were added in their place. 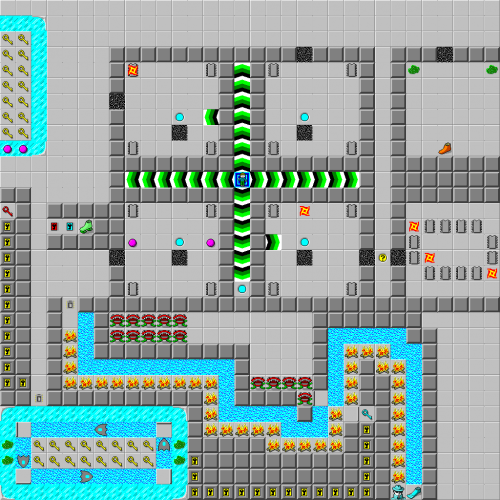 The presence of the exit under Chip encouraged the moot possibility of getting into the exit through unusual means. On April Fools' Day 2010, a notorious hoax was perpetrated which claimed that force floors could be overridden backwards after a voluntary move if Chip holds against the force floor for 40 seconds due to an almost undetectable timing error when changing Lynx object movement into MS. The AVI containing the supposed 310.0 time achievable this way is the second video.