Invincible Champion is the 77th level in Chip's Challenge 1. A map indicates that the bugs should simply circle around forever, only disturbable with a well-placed glider, but instead one bug at [18, 10] is pointed west instead of north by designer error. This subtle change causes a bust resulting from the monster order becoming lost in translation between MS and Lynx.

In Lynx, the bugs all run in order, and it was likely assumed this would be the case in MS. However, this bug now moves D instead of L because of its west direction and placement ahead of the other bug, at [19, 11], that also tries to step on [18, 11] on the second turn of the game. This jams up the chain for a couple seconds and leaving a very wide gap that you can jump into as you walk to the left.

Only two small tricks are needed for 481. Wait exactly [1] after following directly behind when collecting the first chip; no waiting causes the bug to reverse U and kill Chip, while any more lets one of the loose bugs on the far east stop Chip from turning the corner. There is just enough room to sneak 4U L from the last chip safely, which speeds up the route to the exit. 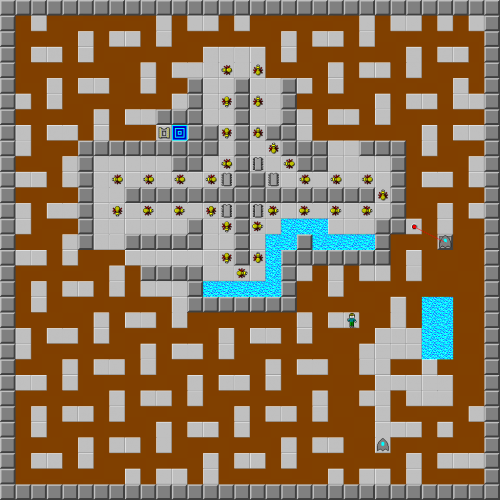