Four Plex is the 76th level in Chip's Challenge 1. As expected, the level contains four separate sections, all of which are rather challenging. The variety of puzzles to solve in Four Plex is staggering, and there are several secrets Chip could miss on his first completion. All in all, Four Plex is quite a tough puzzle.

Begin with R and RDR, follow the open space and open one blue wall to the red key above. Now, slide back through the teleport, then move 6D >RLR to access the yellow key and >LRL to escape from the first room.

Now, Chip is in a little tussle with pink balls to the right; free both of them and slide on the force floors. The idea of this section is to bring the four blocks down to the bombs, although there are a couple snags: there's a bug that can sometimes get in the way, and Chip will have to go through the ball elevator that gets tougher with each pass. To speed up the process slightly, move each block 2R from gravel 1 before you take the second one RD from gravel 1 and then use the former one. Also, watch the pink balls; they are the only barrier Chip will encounter.

In the third section, Chip can simply clone one glider at a time, but this is rather slow. For a speedy solution, close the toggle doors and then clone and release two gliders. Off the brown button, step 2L 2U RUDL 4D (chip) 2U 2R, clone and release another two gliders, and from the brown button move 2L 2U RUR 6U R 2U (chip) 2D L 7D 2L D 4L. Wipe the chips out, go to the interlude of recessed walls, and take the first three chips as they come. Drop to the bottom of the area, take the first chip below, and then take the remaining chips as shown. In the final area, use wedges to collect the keys and chips by moving blocks 1 and 3 to the side to free the middle blocks, and then trade away until Chip gets the flippers to swim to the exit. 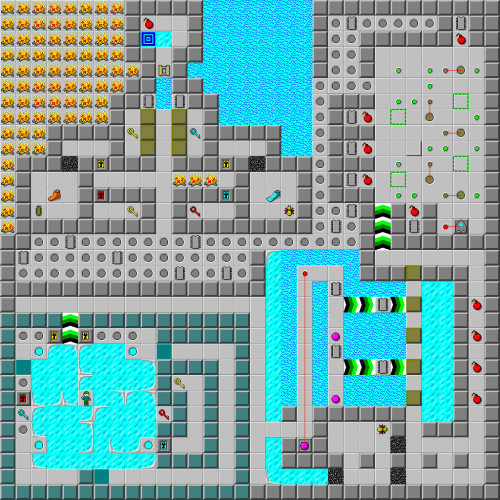