Juxtaposition is the 70th level in Chip's Challenge Level Pack 1. Juxtaposition is a maze made up of a very large checkerboard of blue walls and thin walls, which the hint describes as a square-shaped blue wall maze that has somehow fallen on top of a diamond-shaped thin wall maze.

As this is a rather long maze level, clocking in at 74 seconds even when optimized, a text guide will not be provided. The best casual approach to a blue wall maze such as this one is often to simply try every single blue wall; fortunately, the time limit of 500 is quite lenient, especially for a beginning player. To make playing somewhat easier and quicker, a full map and solution guide have been provided below. For those who care about their scores, the bold time of 426 allows for up to [3] to be lost; which, when combined with the use of a map such as the one below, will make 426 far less daunting than it may appear. 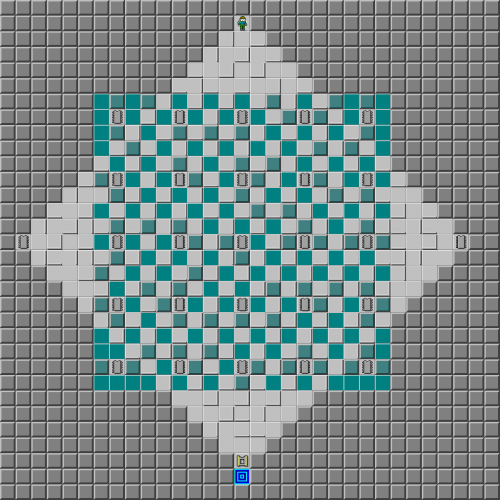