In generally all Chip's Challenge guides, directional notation is used to signify a series of moves, taken through open spaces, invisible wall corridors, over ice and force floors, or any other place where it is seen fit to use.

The basics of directional notation are the four directions:

Any number in front of these four signifies that many moves in that direction; no number means only one space. Each turn is separated by a space, except in the cases of consecutive one-move runs (ULD rather than U L D).

Other forms and special symbols[edit]

Because Chip’s Challenge can require much more than simple maze navigation, where certain dead ends and items can force Chip into leaps and bounds, many symbols and different formats of directional notation are required. The types currently in use are listed as follows.

Wait this many moves before continuing. Should this occur in a line of block pushing, Chip would be commanded to wait these moves before resuming his block pushing. If moves are inside these instead, they are being used for recursive dead-end, >[X] or 1:A notation.

In mazes with many dead ends such as Chipmine or Mishmesh, writing every move would be cumbersome; directions inside parentheses indicate paths that will be retraced directly after the parentheses close. Terms separated by a comma within parentheses indicate that all of these terms originate from the same location, and should be done immediately following each other.

There are many possible expansions of [number] and (moves) notations for specialized situations. Brackets containing moves that are simultaneously within parentheses note a retraced path branching out from another; as normal notation would make it unclear if the second retrace is part of the first in both directions, extra clarification is added when it is.

A notation of (3D 5L [U :U] 4D) would mean that after 3D 5L, Chip moves UD, then 4D retraced, and then performs the UD move a second time (usually for button presses, such as in Memory) before retracing 5R 3U. Simply (3D 5L [U] 4D) allows for the UD move only on the first pass; this would usually happen when a computer chip is collected during this retrace.

A number within parentheses works the same way; [2 :2] would mean Chip also waits [2] at this location on the way back from the moves in parentheses. Note that the waits do not have to be of equal duration as long as they are on the same spot.

All of these can also be separated by commas when many dead ends run into each other: (3D [L, 4R, 6D L]) = 3D L 5R 4L 6D LR 9U. Like parentheses in math problems, they can continue to combine themselves to infinity, but when this is difficult or merely more troublesome than it’s worth, bases are used for extremely busy hubs.

When a word is in parentheses, it notes happenings that are occurring in the level, such as an item being picked up, tiles such as the toggle wall changing state, or in some other cases as an explanation for what is happening or why something was done. (chip) means that a computer chip was picked up with the last move. (toggle wall closes) means that on the last played move, a visible toggle wall closed itself. The use of all such happenings is called specific directional notation.

Slide in this specific direction, as if Chip were using suction boots or ice skates, starting from the first force floor or ice he steps on. On force floor levels such as Force Field, Chip's movement cannot be expressed as normal walking. Separation of turns is accomplished by placing the moves that are to be slid in brackets; since moves rather than numbers are always within them, no ambiguity arises, and retracing is extremely rare when sliding.

Directions in this format, such as 5D-L, are shorthand for diagonal moves: DLDLDLDLDL in this case, with the first direction being the first one moved. Levels such as Stripes? would include heavy use of such notation. While still used, this notation is technically obsolete after the introduction of 1:A notation, which covers these cases and many more.

Note that brackets are used instead of parentheses to enclose the moves repeated, as parentheses would be more ambiguous. Brackets would not be used in this situation to mean their normal function; if other dead ends occur within the repeated path, parentheses are used as normal. If the moves 5U 3L 4U LR 4D were to be repeated 6 times, the notation would read 6:[5U 3L (4U L)].

This rare notation notes when the mouse is clicked and Chip moves or tries to move in the direction specified. Though this is almost always for the purposes of the Mouse Panel Glitch, Twice Step Glitch, it can be seen in rare situations where a [1/2] wait is desired on the first move of a level, such as in Icehouse.

Also quite rarely used, the hyphen notes that Chip ran into a wall of some type, almost always for the purpose of a flick or a ram. When combined with the asterisk notation, it shows that the Mouse Panel Glitch was used to flick the block in the second direction, thus causing Chip to move in the first. *U-L would note that Chip used a *L mouse click to move -L, such that in the end he moved U instead.

Often, a guide will call for a block to be pushed in certain directions; unless otherwise directed, take the most direct route to the side of the block which allows the next move to be made.

Moving a block 4D 5R D, as specified in a guide, would mean to push the block 4D, then take the quickest route to L off the block and move it 5R, then the quickest way to U off it and move it D. It is also worth noting that such moves can imply some other action without stating it; if an item is located in the pathway to the north side of the block in the D move above, collecting it is implied. There may also be more than one way to the side of a block, where a slower way touches a vital square or collects an item; the guide will specify the way that touches this square.

In addition, where using grid notation would be too difficult for anyone sans map to read, a command may be made to move an object to a specific amount away from some prominent tile, usually dealing with a series of items that should be picked up in a specific order (e.g. "Take the chip 2U L from the water first"). Other uses may include explicit demonstrations of a monster's movement, where the position of this monster is important, such as in collision situations.

An image demonstration of directional notation is shown in this small level: 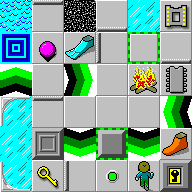 The solution to this mini-level is to open the toggle wall, take the yellow key and use it to get the fire boots, then open the socket and take the flippers to allow Chip to swim to the exit past the pink ball. The way this would be expressed in specific directional notation is:

In simplified directional notation, the route would simply be expressed as L 2U 3L >[2D R] L >[2U R] RD 3R 3U RLURU 2L DU [2] 2L D. Note that because a different path was taken to and from the green button, parentheses are not used.

A mixture can also be used, depending on which events are seen as important in a specific level. Particularly momentous events would be specified in parentheses to accent their importance.