Lead Us Not into Temptation

Lead Us Not into Temptation is the 114th level in Chip's Challenge Level Pack 3. It was created by Madhav Shanbhag. It is notable for having the first discovered major bust in CCLP3, as discovered by David Stolp.

516 route: Collect the flippers, then go through the lower thief to collect the yellow key and 1 blue key. Go across the force floor, through the blue door and up the ice. With no more blue keys left, Chip will bounce off the blue door at the top. Push the block (cloned by the teeth) into the water. Clone another block, push it 2L, then another block, pushing it 1L. Push the left block into the water, and the other block D R. Clone another block and push it over the ice slide. Go over the red button and to the left through the teleport. Gliders will be cloned, but the blocks will stop them from overwhelming the level. Once through the teleport, pick up 1 red key, press the blue button, wait [1] then move D U, reversing the tank so that it explodes the bomb to the left. Dodge the pink ball, collect 1 set of fire boots, go through the red door, fire and thief to reach the green button. Go back to collect the other set of fire boots and past the pink ball (the toggle button will need to be pressed twice in order to dodge the ball). Slide up the random force floors, walk round the thieves to reach the green button, slide back and down to the gravel. Go down to the 4 walkers in traps. Release the bottom one, push the block across the water and into the walker column. Build down the water column to reach the yellow key, continue building down, then collect the blue from behind the yellow doors towards the left. Open the blue door to the right of the exit, push the block R, collect the top blue key, open the blue door, and push the block through the teleport to reach the exit (the socket teleport will be bypassed as no chips have been collected). 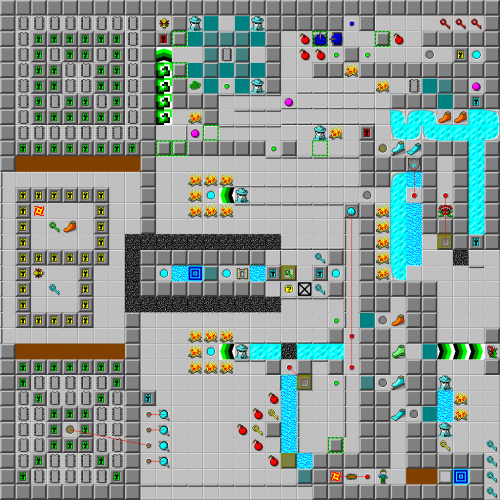