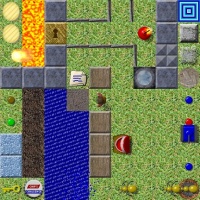 Madhav Shanbhag is a famous level designer and contributor to the Chip's Challenge community. He was on the CCLP3 staff and did a large amount of playtesting and organizing of the set. He developed Tile World 2, which added many much-wanted features since Brian Raiter stopped working on it. The ability to fast-forward and rewind TWS solutions was added, a new interface was designed, and CCX files were introduced that could allow text to be displayed between levels.

Along with Andrew E., Madhav also wrote a program called cclpinfo which can display all the names and numbers of each level in a level set, along with the option to also show the hint, password, time limit, and chips required. In addition, he wrote a program called ccdiff which can pinpoint the differences between two versions of a custom level set, and designed a custom tile set called Natural CC in which Chip walks around in a grass field collecting potato chips.