Mice Are Good for Something

Mice Are Good for Something is the 117th level in Chip's Challenge Level Pack 3. It was created by David Stolp, and the block formation is in the shape of an actual mouse. This contains 16 usable blocks to bridge to the thief that allows Chip to slide over the ice at the beginning of the level, thus allowing him to avoid the pink ball. Despite the fact that advanced mechanics and obscure puzzle motifs are common in David Stolp's levels no dirty tricks or use of the mouse is required in this level. In fact, the level feels like something unfair could be possible, but the closest we get is in the title, which parodies the term mouse. The pi character below the mouse is also a mark of David's entries in CCLP3.

The 620 route uses the following recessed walls for each block:

The setup at the start of the level was built such that the Non-Existence Glitch would allow the level to be busted by waiting until the ball stepped on [0, 0] to move R. This would allow the player to forgo all the block pushing. This bust never made it to a released version, and it seems that David decided that pushing the blocks through the successively more difficult recessed wall, ice and force floor maze in the southwest to bring them around to the water was sufficiently entertaining. The voters of CCLP3 seem to have agreed. The idea for the bust did appear in David's set pi in level #10, "jump, chip, jump".

When the record for this level was confirmed, it was the longest standing unconfirmed record of CCLP3 at just over eight years (2939 days). Bug Arranging and Complex are close behind though, so those will soon surpass this duration. A feature of the level that makes it difficult to process what exactly needs to be done to find the quickest method, is that the recessed wall section of the level could in fact process five more blocks than are required. 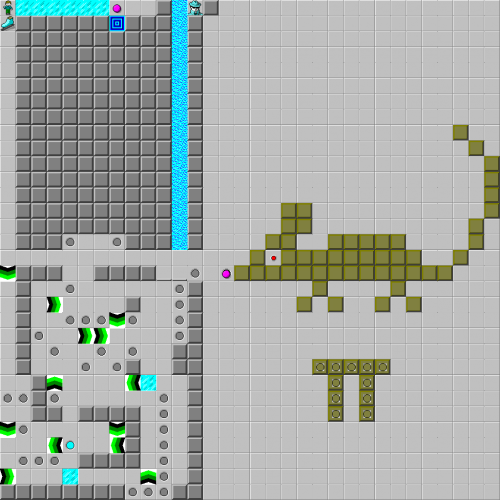