Motion Blur is the 34th level in Chip's Challenge Level Pack 3. It was created by the CCLP3 staff. It functions as the Cypher level for CCLP3. The creatures' movements spell out the letters, which are the passwords for Replay II, Mini Challenges, and Recurring Dream.

A special contest was organized to create the Cypher level for CCLP3, and this submission (originally titled Animated Cypher) won that contest.

870 route: The first thing to note is that at most 17 chips can be collected, else the level will be cooked (Chip will be trapped at (20,30). Therefore, the only correct way of completing the first room (picking up all 5 keys and allowing access to the other rooms without collecting too many chips) is to move 7U 3L (3D) 3L 6D, leaving an M shape. Now walk straight through the toggle room and up to the green button. This causes the teeth to move in an M shape to explode the bombs. Move to the right (past the pink ball that is moving in an L shape), and push the block in the next room in order to collect the skates (the block will move in a J shape). Collect the yellow key, teleport down to reach a second yellow key, then collect the red key via both yellow doors (taking care to avoid the fireball which is travelling in an S shape). Now return to the top left room, press the green button, move the block D 2L, open the red door, press the green button, push the block 2L then D (pressing the green button twice in quick succession en route) to push a block onto the red button, which will clone a paramecium in the adjacent room (it will move in a P shape). Now go the bottom-left room, where it is necessary to remove the walls at (7,27) and (4,27) for the tanks at (6,27) and (5,27) to be able to leave those squares (the tanks will now move in an L shape), and the green key can thus be collected. Now go through the green door in the chip room, and dodge the walker (which is constrained to move in a J shape) to collect the fire boots, and move right through the thief. Press the green button and step on the vacated trap. The bug will move in a G shape to release chip onto the fire boots, allowing the right centre room to be reached. Push the 3 blocks in this room into the water to obtain the flippers (the monsters are constrained to moving in an M shape). Now go down, push the first block 2D, then the second block 2D, then push the first block 3D L, then push the second block into the water (do not step on it). Step on the trap, from which you will be released by the fireballs travelling in an L shape and get 2 blue keys from the next room whilst avoiding the glider (travelling in a P shape). Return to the room with the skates to collect the third blue key, allowing Chip to reach the exit. 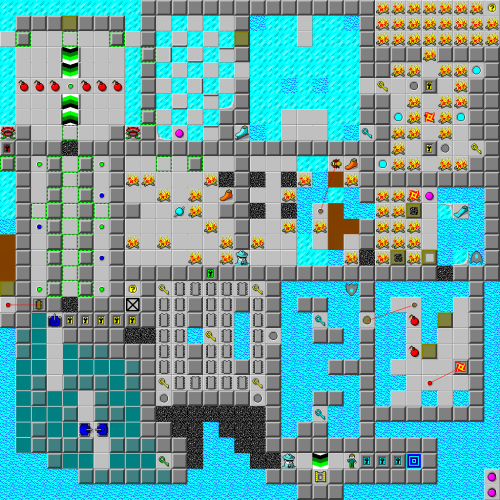