Vague Dream is the 33rd level in Chip's Challenge Level Pack 3. It was created by Madhav Shanbhag.

The 9x9 tile arrangement comprising this level was originally created to make a screenshot illustrating the "Natural" tileset, as seen below. It was supposed to look like an interesting part of a larger level. 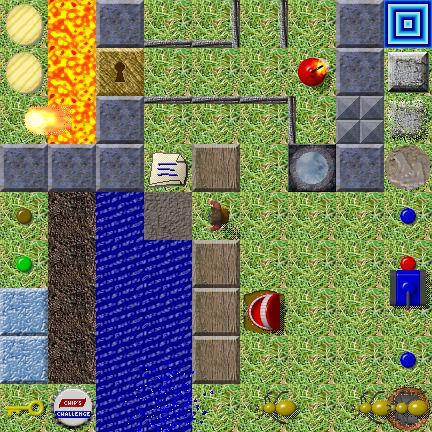 The designer later realized that this fragment could be a solvable puzzle in itself. Consequently, the level was added to KeyboardWielder.dat as a "filler" between levels 3 and 5. Minor modifications were made to prevent glitches and ruleset differences, and the bomb was moved down to allow an alternate solution using the teeth.

According to the CCLP3 story, Chip stumbles upon this level fragment sketched on paper in the Bit Busters' lounge. He then dreams about it in Vague Dream, and later again in Recurring Dream. But the actual level was never built (perhaps it was going to be level 149).

Push block 2 left one space (collecting fire boots), move the top block R 2D R (without disturbing any dirt) then press the top blue button twice – if timed correctly, the tank will stop on the bottom blue button. Move block 1 3D L and press the red button. This clones a bug which will explode the bomb. Push the now lowermost block left into the water (and step on it). Move 2R U L U 4L 2D to pick up the yellow key (flippers are hidden underneath the block next to the teeth). Go up through the teleport (it is the only one in the level, so Chip will go straight across) to collect the chips (even though only one is needed, it is just as quick to collect both). Push the remaining block down and left to reach the socket, open it, press the red button then move up. Eventually, the bug will press the green button, allowing Chip to exit. 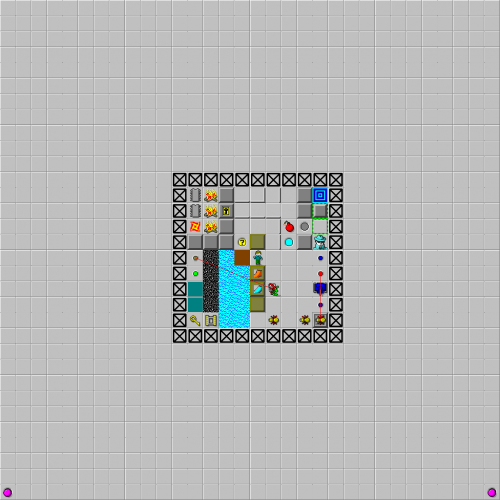