Mugger Square is the 48th level in Chip's Challenge 1. In fact, there aren't many thieves in this level, but they are placed in vital pathways. There are four separate sections with all the boots in the book available, and with chips in each one.

Start with the chip in the walker area (fortunately, the walkers never bother Chip), then the chip in the ice and pink ball area, then the water and glider area, and then finally in the fire and fireball area. Since the exit is in the pool, Chip needs to leave the flippers behind from the ice rink. Now, take the last chip from the thieves and move DR, D off the west force floor going into the teleport, and then take the flippers from the ice rink. Teleport back into the force room, immediately override the south force floor by stepping left, and now swim out to the exit.

Note that due to boosting, neither the skates nor the suction boots are necessary. In Lynx, they are necessary as force floors cannot be overridden immediately after teleporting. 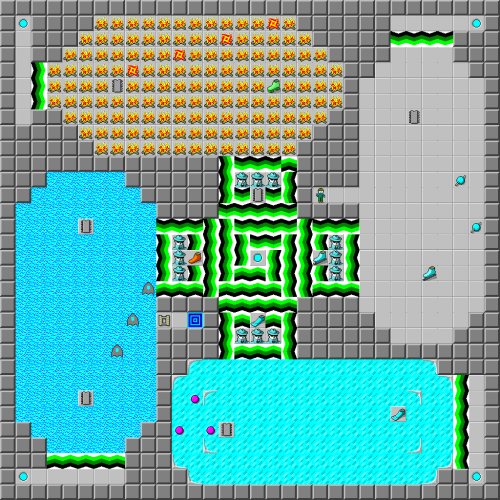