Roadsign is the 93rd level in Chip's Challenge 1, containing a collection of force floors and an actual "stop sign" in the northwest area.

Take the block from the water on the right, place it L from the start, and then play U 3L D 8L 2U L 3U DU to switch the toggle walls twice. This causes the pink balls bouncing on the far north to get trapped behind them, while keeping a third toggle wall open for later use. Play this block 3D 8R 2D 2R, the other block above that D, and then start moving to the north.

Throw both blocks above the start into the passageway above, removing one bomb and preparing the second, then continue past this, take the chip behind the block above, and shove the block 3U 3R U 3R before diverting to the left and take the chip behind the now-trapped balls. Resume moving the block 2D 4R 10D (using the ice takes the same time as walking around the other way as long as you boost successfully) 2L 4U 4L 2D 2R, all the way west from the force floor, and finally 3D 2L. Knock the block below that under the gravel and then slide 2R D, shove this block 5D, and play 2U 3L 2D 4L 2U 4R to cover one water space. Go collect the block near the start and insert it into place to use above, then go the bottom and play it through the maze in prelude to using the block already in place.

When that is complete, collect the chip to the east, and then play the third block in the maze 2L 2U 4R, up to the top, and all the way to the water in the northwest for the last chip. Finally, walk back out to the exit, using the ice once again to solve the level in 650.

Having lasted close to 18 years (6449 days) the 650 on this level is one of the longest standing records ever to have been broken. 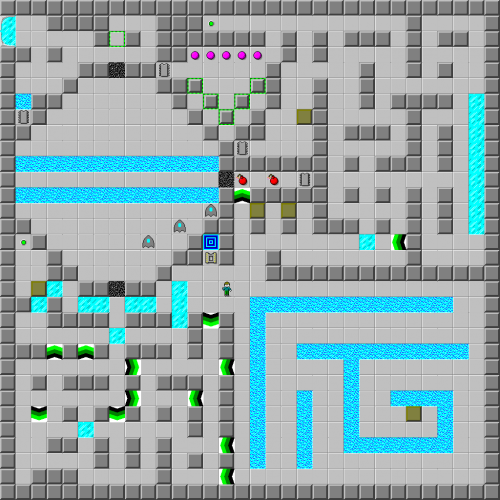