Seeing Stars is the 37th level in Chip's Challenge 1. The level contains lots of block pushing, with pairs of blocks punctuating four-way star formations that taper off at pairs of chips behind water. Two distinct sections exist: the lower should be set up first to allow other blocks to enter the lower section. 32 blocks are in the level, with 28 reaching pairs of chips, two running over extra water spaces and two left unused.

The solution shown below has a distinct theme to it: wipe out the six areas on the right side of the bottom, set up a chain of consecutive blocks on the top and the bottom of the eight-way star in the southwest, and use two blocks from the north area to fill in the gap in the chain on both top and bottom. A common maneuver is to push a pair of blocks 1 space and 2 spaces respectively in the same direction, and then to use the blocks in opposite directions. 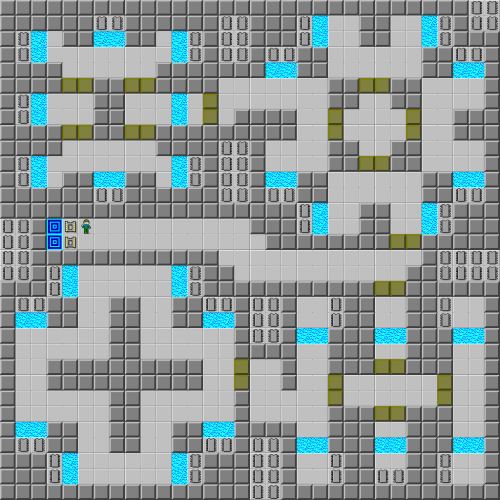