Sudden Death is the 24th level in Chip's Challenge Level Pack 2. With a mess of puzzles and a blob in the mix, Sudden Death has a lot going for it as a level, even if it's not that hard.

Slide D, then move U 5R 7D, onto the trap and all the way south, and use the clone blocks to straddle the force floors to collect the goodies. Take the green key and chips near it, the remaining chips from the blob, then pass the second set of tanks and collect the one chip on the bottom.

Return to the start, ignoring the other chips, take the one chip past the hint, and then walk back out to collect the chips left in the first set of tanks. To finish this area, pick up the chips and keys above the second set, and then sneak past the blob one last time; behind the green locks and blue lock is the exit. As many as [4] can be spared running past the blob on the path to the exit.

The reason why a 305.8 is scored, rather than a 306 -.9 time, is because the boosting onto the exit was done off an even number of sliding tiles, when a spring slide is impossible. Hence, an additional [1/2] is added to the duration of time it requires for Chip to move into the exit, which combines into a full [1] under 306 and hence 305.8. If Chip arrived [1/2] later to the force floor strip and had only three force floors, a 306 would be scored.

In Lynx, clone blocks with nothing under them are read as normal blocks, which causes Chip to push them and be squashed in return. Even if they were stationary walls, the level would still be unsolvable, as Chip cannot step backwards off a force floor throwing him into a wall, although he can move sideways, as would be shown if Chip were to move D in this situation. This, however, leads to the same impossible problem as on the upper force floor. 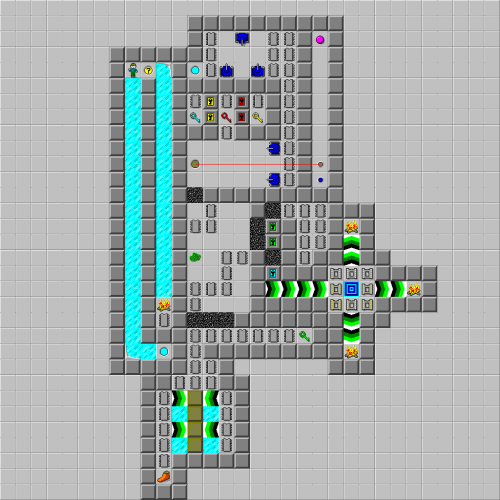