The Ghetto Defender is the 89th level in Chip's Challenge Level Pack 2. In this Nordic-influenced level, Chip must negotiate various obstacles, many of which are red herrings, so he has to be careful what he chooses. For example, if Chip turns to the west, takes the ten chips and lets the bugs out of the way to collect the two keys, and tries to exit below, he will be disappointed by a hidden wall.

Since the ten chips can be collected anyway later, and the two keys have no use anywhere else, move to the right: >U R 2U 3R from coming out of the teleport, in even step specifically. Now, due to the hidden walls blocking off another teeth below, Chip can dive right in to take the goodies, then 2U and left.

Continue following the path, take the chips, and then move blocks 5, 6 and 4 into the water; block 3 has a bomb under it. If Chip storms the thief to take the yellow key, the loss of flippers leaves him trapped behind water, and there aren't sufficient blocks to bridge across; the flippers have no other use, so ignore them. Keep moving all the way to the yellow lock, then take the upper ice slide and continue west. The yellow key is barred on seven sides by hidden walls; D and DL are open, so take it from the bottom, hopefully not losing any moves as a result of the walker. Now, Chip can pass the yellow lock and just escape the trap to exit. 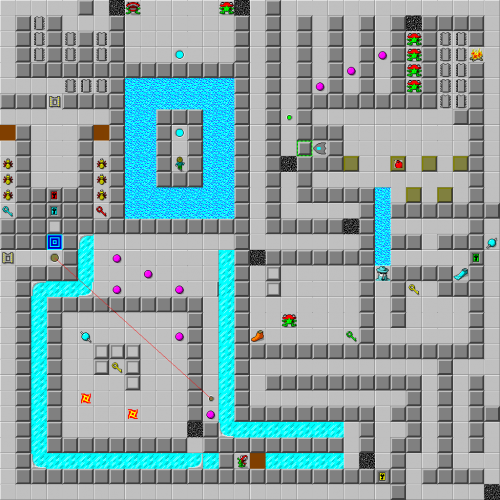