Marjolaine's Maze is the 90th level in Chip's Challenge Level Pack 2. Like the previous level, Marjolaine's Maze is a rather outlandish design, with heavier Scandinavian influence added to it; but is easy to navigate through. If the player tries to speed it up, though, they will find that there are several unnecessary pieces.

Touch the teleport in the maze (>D), continuing >UD to collect a blue key and to reappear on the other side; turn right and collect everything but the red key, and then teleport >UDU, squeeze over the ice corner and take the fire boots, and now steal a block from the third row of blocks. The other two rows are all clone blocks, with the exception of block 1, which can't be used anyways.

As you pass the start, skate right and take the chip, then use the block on the very bottom water space to reach another chip. Skate to another chip, then into the fire area, and squeeze past the bugs on the very top end of the hive to reach a chip. In the southeast corner is a green key; take this, then slide >L to appear in the final section. To speed this up slightly, slide >R again, take the three chips above, then slide >LRL rather than skating. Now, Chip can pick up the last chip and exit quicker. 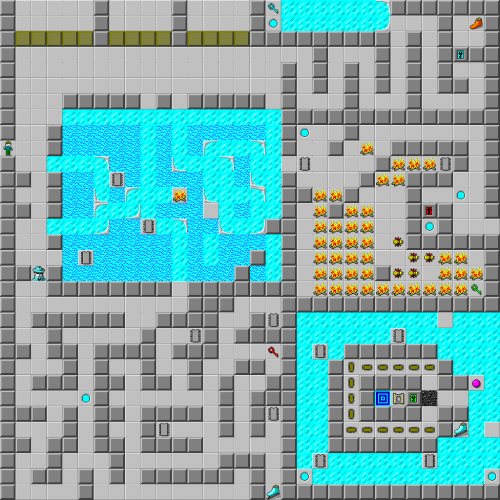