Triple Alarm is the 102nd level in Chip's Challenge Level Pack 3. It was created by Peter Marks.

350 route: The tank below the start is controlled by 3 blue buttons which are all pressed every 20 steps, with one being pressed approximately every 7 steps, thus stopping the tank from hitting the green buttons, which will release several teeth as well as make the exit accessible. At the start, teleport and use the 3 blocks to collect the blue key and skates (without disrupting the glider). Go through the blue door to the left, follow the paramecia down to the block, and push the block L (underneath it is gravel). Immediately collect the 4 chips below and move RD afterwards. Go down and collect 2 blue keys and a red key (you can walk through the ice corners). Teleport and return to the top, collecting the fire boots from the top right room, then collect the remaining chips from the paramecium room, open the blue door below and push the block into place so that the fireball’s circuit is not disturbed. In the fire room, push block 3 U (to collect the green key) then back down (otherwise the fireball will be deflected into the path of the tank-controlling fireball). Return to the top right and collect force boots and a blue key from behind the green door, and go through the green door below. You now need to clone blocks in order to collect the chips (fill in (28,10) to make the route quicker). On reaching the bottom, go through the blue door and collect 3 red keys and a yellow key (from under the block) then press the lower-left blue button just as the fireball moves to 3L D from the button. Collect the chip behind the yellow door in the top-right corner, then enter the chip ring. Walk anticlockwise from the top right, waiting [1] before collecting the final chip, then go through the red doors and exit. 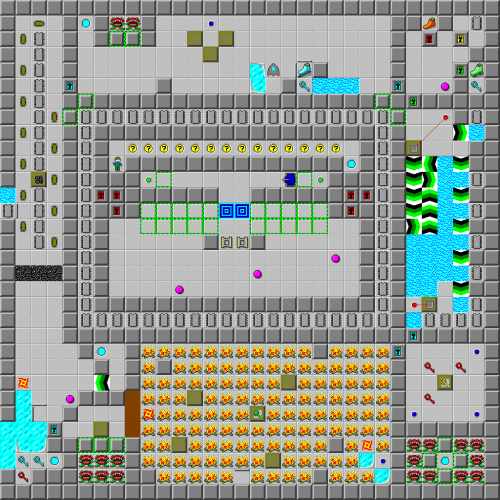