Vulcan is the 137th level in Chip's Challenge Level Pack 3. It was created by J.B. Lewis, and was named A Cloning Level in his original set. This level is similar in structure to Cloner's Maze as a large monster-cloning level with a small itemswapper component. There are two primary solutions to this level; the intended solution as confirmed by the designer, and a busted solution that is conceptually simpler. An optimized route for this level is complex enough and the public solutions are far removed from the bold solutions, so this wiki page will not presently be going into specific move by move details.

The intended route sends the glider from the top room down column 14, where it eventually clears (30, 27), and a fireball cloned from the lock room down column 13 using the (7, 11) block and (12, 13) chip, deflecting off the row 30 block into (23, 27). The multitude of blocks are used to access the second tank button, which will result in the tank holding down the trap button.

The busted route takes advantage of the excess blocks and takes 2 from the top room into the lock room via column 14. One of these is used to fill the water at (26, 23), and the other is used to direct fireballs from the (29, 29) clone machine into the bombs. The trap button is then held down using the block starting at (4, 22), leaving it at (7, 29) to direct the column 1 fireball back onto column 1, in turn clearing the way to the (15, 19) chip. 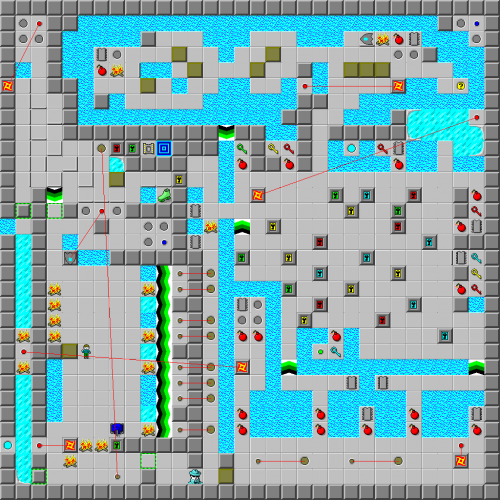