Cloner's Maze is the 147th level in Chip's Challenge Level Pack 2. It was designed by Eric Schmidt and is the third of five secret levels in CCLP2. As noted in the hint, there may not be any fast maneuvers or split-second timing required, but Cloner's Maze is nevertheless an excruciatingly hard puzzle at its hardest, though trivial in some cases and not too difficult in the early stages.

Maneuvering skills require sending monsters across changing landscapes into several bombs, sticking monsters on traps to deflect others, and using uncollected chips or even other monsters to deflect monsters into place. In fact, a split-second double-monster collision is used to provide a back-door entrance to the yellow key. The original solutions included cloning numerous gliders across the very top to eventually get the bombs open by brute force.

Cloner's Maze is the third of the three CCLP2 levels on which the bold route is unknown to everyone other than its single holder - the best public AVI and TWS solutions are 8 seconds short.

In the MS solution, Chip must walk through a trap on a watery corner, but in Lynx this forces Chip to drown. Later, a fireball crosses over a blue key before destroying the bomb guarding it, so this too would not work in Lynx as the blue key is erased. However, since gliders are not destroyed by fire in Lynx, there are more opportunities for collisions, and the level is solvable by other means. The key differences are getting to the green key and the lower blue key, which correspond to the problems described above.

A simple method to reach the green key in Lynx from the start of the level is to first clone 16 gliders, destroying some bombs and leaving a couple stuck in traps. Then clone four more, but wait about [44] inbetween each so they don't collide in column 7. Now two of them will destroy the bombs in the south-east corner, one is stuck in the trap at (16, 14), and the last one makes its way around to destroy the bomb at (20, 3), granting Chip access to the corridor above.

Though the level is solvable in Lynx as it is, admittedly it is a considerably more complicated task. That being said, with careful planning and delicate timing, the optimal solution in Lynx is faster than in MS.

Alternately, you can edit the level so that the intended solution works. Simply remove the bothersome water tile at (22, 3) and switch the blue keys and blue locks to their red counterparts. 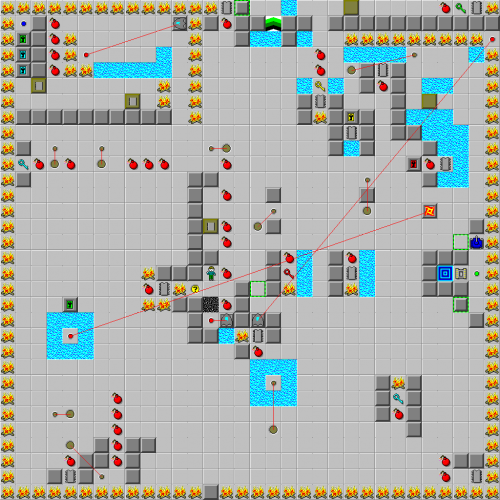