When Insects Attack is the 6th level in Chip's Challenge Level Pack 1, and the sixth of the lesson levels. This level specializes in bugs and paramecia and how they interact with other tiles around them, such as dirt and gravel.

The best possible time in the MS ruleset is 185 seconds remaining. Cut through the area above the starting point to get the chip being circled by a yellow bug, then continue along the outer wall until you reach the two chips behind the dirt where a paramecium can be found. Chip needs to wait [3] moves before clearing the second dirt tile; a safe way to wait out the [3] is by moving D-U-L and then continuing right. Clearing this dirt tile will cause the paramecium to get stuck looping indefinitely, so you can go around the edge of this room collecting all the chips with no trouble.

By this point Chip should have three chips remaining to collect. The first one to go for is the one in the center area with the fire; since Chip has waited so long to pick it up, the bug will not get in the way. The two chips left are both at the bottom of the level; the first one to get will be the one on the right, which can be gotten without interference from the monsters. Collect the final chip and run for the exit. 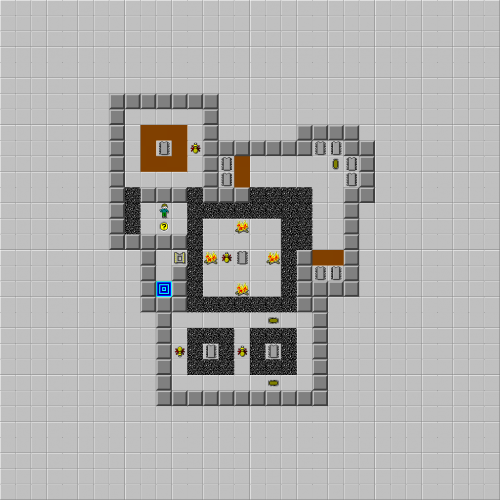