Difference between revisions of "In the Slime"

In the Slime, as its name suggests, is almost entirely covered with green slime, and three dirt blocks are to be used to make enough space to reach the nine computer chips and the exit. Achieving this is a deceptively difficult challenge, but the solution is easy when you know how.

The first step is to move the leftmost block directly south to five squares from where it starts; then move the second block down three squares; and finally move the last block down four times. The chip to the right of the middle block provides the required space to shove it three squares left. Go around and move the same block once down, then once left, and then twice down to access more of the chips and retrieve the block from earlier. Move this block once up, thrice right, and twice down. Thanks to the positioning of the third block, the player can now move right and down to move the block three tiles left and access the last computer chip. Pick up any chips that have not yet been collected, then move the block back to the east as far as possible. Now standing under another block, hold north to pack it into the water and head for the exit. 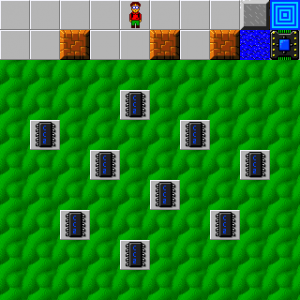