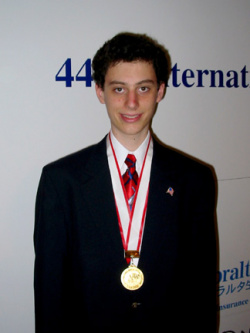 Pictured: Anders winning a gold medal in the 2003 International Math Olympiad, scoring 32 points out of a possible 42.

Anders Kaseorg was one of the most influential Chipsters of the early to mid-2000s. He has made many contributions to the Chip's Challenge community, the most important one being The Chip's Challenge Corridor. It formerly included a web based newsgroup as opposed to the older e-mail based one, but unfortunately it was taken down in 2016 to cut down on costs. He also hosts a Chip's Challenge FAQ on this site, which also provides a direct link to his ChipCap program. The site also contains a link to some older versions of Tile World, for which Anders designed the tileset that is still used by default to this day, as well as a preview video of Chip's Challenge 2, which would not be released until May 2015, that showcases the level Pigeon Holes.

There are also AVI solutions to all levels of CC1 and CCLP2 on his site, but because the content has been outdated, Mike Lask took over from this. Since then, however, AVI solutions as a whole have been outdated in favor of the public TWS.

He has one level set, AndersK1, which contains 3 levels.

Anders was involved with the making of CCLP2 as the voting site administrator and was initially set to serve in the same capacity during the production of the upcoming CCLP3 but was not an active part of the community when CCLP3 production began. Instead, David Stolp was selected to serve in this position during the restructuring of the CCLP3 staff in February 2010.