Block Buster II is the 116th level in Chip's Challenge 1. The only explicit sequel in CC1, Block Buster II is full of the same continuous boosting sequences, machine-like timing, dangerous blockslides - and sometimes all three at the same time - when playing for the bold. Unlike the original, however, there is an easy, slower way around the hard sections, where in the original the easiest way to win was to learn the bold route.

In the lower section, there are six water spaces that block out the chips; Chip will only need to fill in four of them. The easiest path through the north section of Block Buster II is around all the buttons. First, remove chips 2 and 3 (counting by column reading order), then touch red button 11, which clones two blocks, and push the second cloned block U; Chip will not follow it because of block echo, so the dirt remains.

Clone a total of three more blocks and push them U, such that they return back due to the dirt. Move the first two to the locations of chips 3 and 2, then follow the second block, which frees chips 6 and 7. Collect the remaining free chips after putting the third block into position, and only now, shove the third block over buttons 5 and 7, releasing the last two chips and the blue key. Although the blocks are now blocking out the right side of the section, all Chip needs now is to run to the exit.

The quicker way to the water blocking chips 7 and 8 is up over two red buttons, and is the major difference between the slower routes and the bold route. slide delay knowledge, or just plain luck, is a good companion. The 714 route is better shown than typed out. 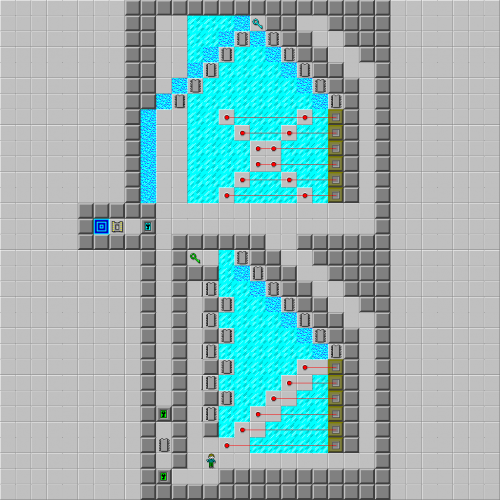