Bumper is the 15th level in Chip's Challenge Level Pack 3. It was created by Ida Roberthson. The name signals the focus of the level: nine blocks, which have to be pushed onto ice to hit another block or the walls and bump straight back to bridge to the blue keys and the exit.

Use block 8 first and push it against the wall between the two water bridges, to be pushed L after a block is used on bridge 2; continue this pattern for the first six blocks, following with blocks 3 and 9, 5, and 2 and 8. For the seventh block, which is number 4, push it precisely 2R U from where it lands, and after using either block 1 or 7, push block 4 L on the way back to the other. With no block to bounce 1/7 against, Chip cannot use it the same way as 7/1; push it 2R and D/U, and block 4 will be pushed one square closer to bridge 1 as Chip circles around to the top of block 1/7.

Although this technique saves only [2], it increases the bold time from 195.0 to 195.4, which significantly decreases its difficulty. After the second key is taken, bridge straight to the exit. 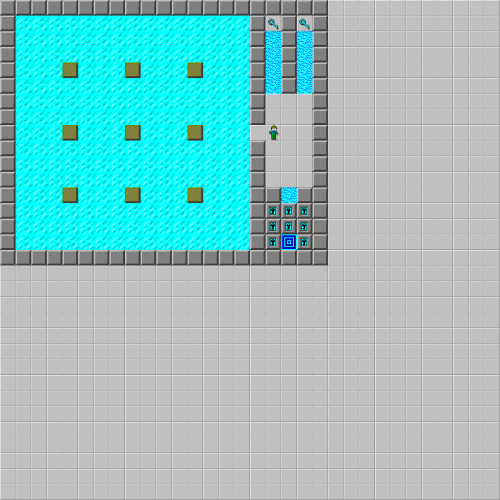