Two Sets of Rules is the 16th level in Chip's Challenge Level Pack 3. It was created by Mike Lask and was originally named MS or Lynx since it highlights the differences between the MS and Lynx rulesets, such as cross-checking, tanks running into acting walls, block slapping, different monster orders, the Controller and Boss Glitch and monster behavior towards specific tiles such as blue keys, the hint and random force floors. 254 requires odd step in MS.

In MS rules, take the chip from the tank, open the blue lock, wait [2] to and from collecting the four chips blocked by the pink balls, swim safely to the next chip, override the force floor on the top path and open this red lock, then use the Controller and Boss Glitch to free the southern chip in the northeast room. With no splash delay, push the block trapping the pink ball, then use the C/B Glitch again to steal the next chip from the bug and use the blue key on the right side of the next room. In the southeast room, Chip must crosscheck the block over the northwest ice corner and only has one chance; failure will send Chip sliding onto the ice skates.

Push both blocks 2U to access the next chip, with URL 2D all pressed at 10 m/s, and take the next visible chip from the open trap, then walk to the southwest corner. The yellow lock leads to more skates and a brown button that frees a glider and a blob, the blob reaching the bomb in the center first and leaving the glider to free the chip to the left.

In the final room, monsters will stick on teleports forever and remove them from the network if there is no legal exit even including the square directly across from it, and thus the west room is useless. Wait [1] just before sliding east; the teeth that has been running around the level will still hit the green button on time, but Chip is propelled into a teleport that simply bounces him back over one ice space and onto a force floor, and with this wait the toggle wall will open as Chip is sliding towards the teleport and not away from it (worth an extra [1]). After the wall opens, Chip slides over the dead teleport and can run into the exit with 254.0 on the clock.

The tank will continue moving if the upper chip is taken; wait until the pink ball hits the lower chip and immediately steal it, then open the red lock, switch the tanks whose monster order prevented you from getting by in MS, and rather than take a fatal swim take the chip which is made safe by the green key as an acting wall. Use block slapping on the way to the red key, then clone a bug from the upper clone machine and turn left.

The glider is trapped by the wall tiles and in Lynx will only move along its current polar axis, so it is safe to remove the block from its west side. The hint blocks off the pink ball in the next room and the random force floor has allowed the pink ball to open up the red keys in the next. In the ice room, take the skates first since the block will deflect off them and kill Chip, then send the block around to the red lock and proceed.

The lower force floor with the other red lock can be bypassed with blocks U and 2U away, with this formation allowing Chip to step off sideways and not backwards; the open trap will lead to a fiery death in the next room and the Controller and Boss Glitch is ineffectual in Lynx, so the further chip is immediately left open. This time the blob survives the trap releases in the final chip room, so wait for the blob to remove either bomb and take the appropriate chip.

In the ending room under Lynx rules, stepping right will send Chip into a teleport with no legal exit and no way across, and this will leave him stuck forever just as monsters do in MS, while monsters that do this in Lynx will ignore the teleport completely and continue circling counterclockwise through the room. Wait for the toggle wall to open and then for the D side of the teleport to be safe, then slide over it and exit from the west. 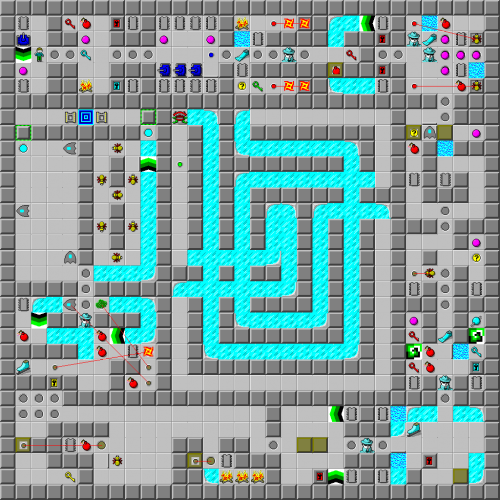