Chip's Fight is the 102nd level in Chip's Challenge Level Pack 2. As indicated, Chip's Fight is a challenging struggle, but fortunately always manages to stay away from being annoying.

Start with D, as L leads to a bomb and R to fire, and U is blocked. This block hides fire boots; with these, Chip can now go back U and push R to remove another bomb. Continue to push UL to take the green key; this will release four fireballs, with the accompanying disadvantages, but it's forced and they do remove two more bombs for Chip.

Now, open the green lock and move the block on the right R, then step U and catch it coming down by waiting [1/2]. This allows Chip to bridge to an ice section; after the long slide, leap (DRDLDR 2D) to reach the blue key, then return back out to the start. When heading towards the blue lock, shove both blocks 7 and 6 L. This will catch and trap the remaining fireballs in the corridor underneath such that they do not bother Chip later, without affecting the slide delay.

Pass the three bugs and touch both red buttons; since you need a block to remove the bomb in the way below, wait [1/2] before sliding to catch the second cloned block. Move the block 3L further, circle underneath it to remove the blue walls, and then knock out the bomb and take the yellow key. Continue to the teleport and move (>R R 3D) to collect one chip, then return back down the path to the east, pick up one more chip, and then drop to the very southeast ball section. Take the final chip, then wait [3] (a move was lost in the AVI, so only [2] is spent there) and push the block 2L to allow Chip to escape. Now, move back to the center and shove block 1 out of the way, then open the yellow lock, walk across the bottom edge and then across column 0 to the exit. 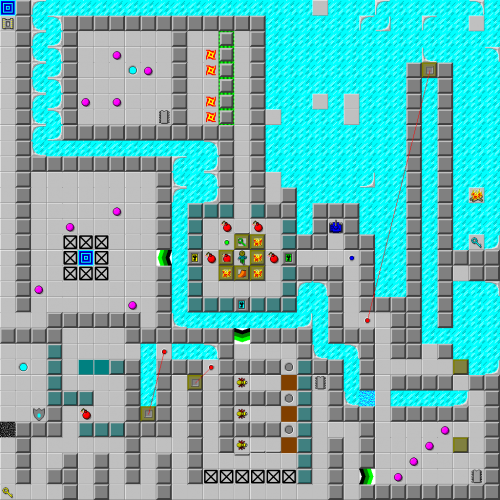