Hard As Rock is the 101st level in Chip's Challenge Level Pack 2. It's not quite clear what the level name means, but it's not likely referring to the level itself; it's not quite that hard. Even step is preferred.

Ignore the block; it won't be required. Move to the second corridor, then up and right to the third as this pink ball clears out, and take the yellow key. Move down through the first corridor for the fire boots, and then wait [5] moves and release the ball controlling the red button in column 2. Now, Chip can barely sneak into column 1 and up to the single chip; wait specifically [2] for the ball chain, and open the yellow lock.

This takes Chip to a fire space; continue following to a clone machine cloning paramecia which was controlled by the ball in the second column at the start. Remove the dirt and play 2U 2R [1] 2L, allowing Chip to reach the flippers. Now, using the top edge of the room, Chip can sneak out past the teeth. In the water pool, Chip must use the far eastern end due to the hidden walls blocking all the other swimming lanes.

Sneak past the blobs, which should be easy due to the massive area to dodge (up to two moves are expendable if necessary), and then follow the path to the exit, which is blocked by a trap. Fortunately, the ball on the fourth column will release Chip on the next turn; if his timing is wrong, he'll get ambushed by the bug.

In Lynx, the yellow key is irretrievable as it traps the pink ball above it. CCLXP2 simply changes the key and lock to be red instead of yellow, and from there the rest of the level works fine. 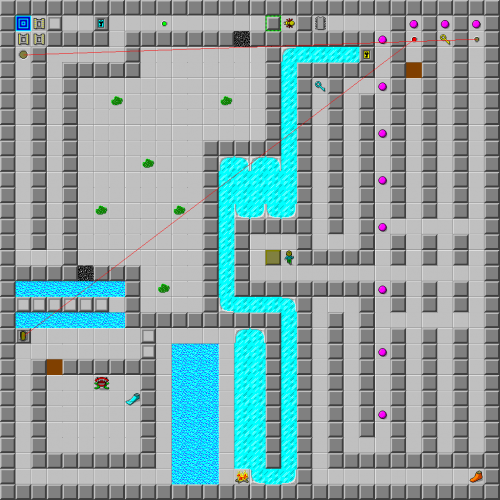