Chomper Romp is the 142nd level in Chip's Challenge Level Pack 2. It was created by Dale Bryan and was named as a "playful" term for the teeth on the warpath. Chomper Romp requires only a keen block selection and some logic to complete, but the bold route shown is notably harder. To collect this, the route is given in odd step, although even step is usable with a drop of [1].

This article describes the steps to achieve the old bold of 518. A faster route that yields 520 can be viewed in the public TWS.

Each of the four sections contains four blocks, one with a boot which allows Chip to hide and wait for the teeth, one with a chip, and two with teeth under them, which is the first occurrence as such and will kill Chip if the block is pushed. In this guide, the boots won't be needed.

Release teeth 1 within this room, then move 2L 2U [2] to keep him from touching all four buttons, but still including both red button which explode both bombs in the room, and now turn to the left of the entrance and collect these chips. Go onto the entrance and all the way down, then 5R U 2R D, utilizing the sideswipe technique to sneak past teeth 3. A couple seconds ago, teeth 1 escaped and released teeth 3, also controlling its release in the D direction. Teeth 3 controls teeth 2, which would have been released far too early into its two chips, delaying Chip significantly.

Take both chips, then move [2] 3L D to escape with another sideswipe, and 9L 2U 4L and down. Teeth 1, as opposed to the other two which are slower, will now fall into the brown buttons above Chip, progressively releasing him into the exit. 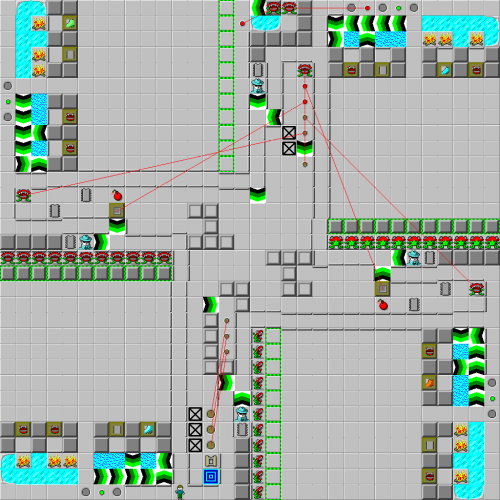