CircleMaze is the 117th level in Chip's Challenge Level Pack 2. It was created by David Stanley. As indicated, the level is made up of several concentric circular layers, adding a twist to the itemswapper design. However, Chip can avoid much of this by walking around and using advanced boosting.

Take the flippers and fire boots, then swim 2R 5D and continue to move LDRURUR 3:UL to "tiptoe" across the floors. Move northwest and take the single computer chip, and sneak through the thief to the west. Step onto the ice and continue to move down, eventually picking up more fire boots. The boots should be collected at 486.2.

Now, move back onto the track west and run >4 2U, with the hope that Chip moves U off the random force floor, leading to the blue key to the north. When this is collected, move onto the track again, and step D on the fifth east force floor. Now, jump at high speed 2R 3D 3R DL, then walk to the exit. The probability of success of this route is 1/64 (three random force floors must move in a specific direction), assuming perfect boosting as well. If Chip wishes to avoid this and collect an easy 475, simply slide across the entire track on top and override to the right, then move 4D 3R DL.

There are many other sections of CircleMaze untouched during this route, but only one can solve the level in Lynx: in order to reach the exit, Chip needs the blue key, and there is only one path out of the west area under these rules. Conveniently, this is also a much simpler route even for MS play.

Move 4R 3U 2L from the original fire boots to collect another pair in replacement, then take the red key and walk across the east side of the level to open the red lock blocking the flippers. From then on, the 475/476 route can be followed in MS; in Lynx, take the second south exit from the force floors, touch this thief and move D 3R to be deposited by the exit. 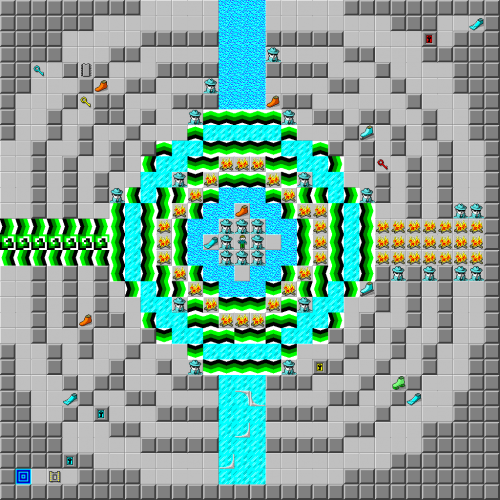