High Security is the 118th level in Chip's Challenge Level Pack 2. It was created by Paul Hobden. This level contains many puzzles and obstacles that allow Chip to complete the level in several different ways, as well as take care of those obstacles in varied ways. Use odd step, as it works easier.

Immediately move to the far west, drop block 3 to the teleport, and move LD to follow it in, RL to pick up a green key, and 2U LU, which pushes block 2 out for a red key. Use this on the red lock above to reach the fire boots under the center block, remove the green locks from the west side and take the chip, then punch the block out of the way to release the teeth.

Step R onto the hint and move [1] DURU [1/2] 2R, which will collect several chips and also drop the teeth into the bomb. Exit the area using the same bouncing force floor by walking 3D [1/2] D off chip 3; note that the chip L off the start could have been collected now at no cost, but taking this as part of the [3] wasted prevents against the possibility of accidentally moving DL instead of LD, thus costing [2]. In Tile World, the method of holding the south key from chip 3 is much easier to use, and collecting the chips this way will allow you to not lose time where it matters.

Slide to some recessed walls and move L, and take the chips clockwise. Chip can now straddle the force floors again - this time RD [1/2] 2D - onto the ice skates, and then collect the remaining four chips here. Use the strip of east force floor to speed Chip up as he moves to four and then three chips, and then slide into the tank area. 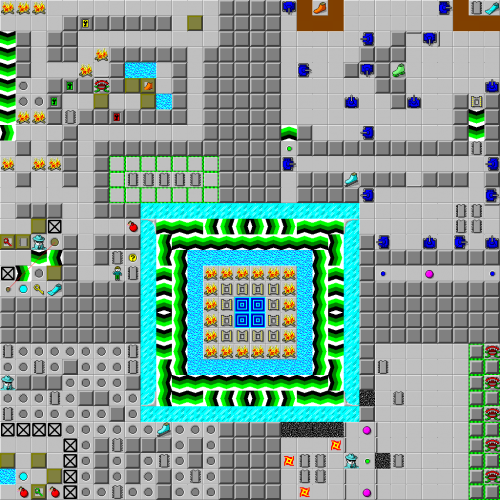