The Frankenstein Glitch is a glitch exclusive the MS ruleset of Chip's Challenge, which allows tanks on clone machines to reverse direction. It is not required to solve any official levels or even to get any bold times, but it has been used in a few custom levels.[1]

Early versions of Tile World did not emulate the glitch correctly, but versions 1.3 and above have patched the glitch in.

The Frankenstein Glitch is not required to solve any official levels, but it can still be observed in a few levels such as Monster Lab. In other levels, such as Catacombs, it is possible to produce living tanks on top of clone machines, but the absence of tank buttons prevents them from ever being freed. There are also several custom levels that require the glitch to be solved, notably David Stolp's level ode to a cloned tank, pointed the wrong way.[1] 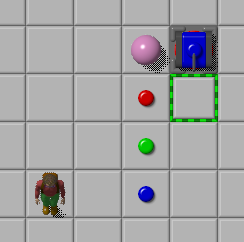 If the tank button had been replaced with another toggle button, the tank would have continued down instead.