Frostbite is the 139th level in Chip's Challenge Level Pack 2. On Frostbite, Tyrethali Ansrath proves that less is often more, as many of his compositions are straightforward and take influence from ideas in CC1, given that his set was one of the earliest. To win it, Chip has to collect four identical, but rotated, sections of chips which give way to ice, making it difficult to figure out what order to collect the chips in in order to get all of them. While this is fundamentally not that difficult, this challenge has proven to hang up even high-level players.

The "bite" in the level's name notes the single teeth; if the route is done properly, the teeth can be ignored no matter which of odd and even step is used.

The 373 route is easily one of the hardest boosting sequences in the whole of Chip's Challenge, on the level of Follow the Glacier Brick Road. Each of the four sections has an identical route, up to a point. Begin: 2U LDLDL into the northwest, and then UR (LDL) DULRULRD2URU (2D) 2D LDLD to come out. This repeats rotated 90 and 180 degrees on the southwest (DLDRD RD in, LU (DRD) ULURLDULDUR 2L UL (2R) 2R DRDR out) and southeast (RDRURUR in, DL (RUR) UDRLDRLU 2D LD (2U) 2U RURU out).

Since Chip must now move into the exit in the northeast area, a slightly different path is required: First, move URULULDU in, then leap around RDULUDR, and now instead of the usual route, finish with 3:UDLR RDR (2L) DR and (2L U), which exits the level.

For an easier route, Chip can take the first 2 rows of the quadrants and then simply walk through the middle, creating the same path as the above faster route. The final quadrant route can then be URULUD 2R 3:UDLR RD 2L RD 2L UD and then hold right into the exit. 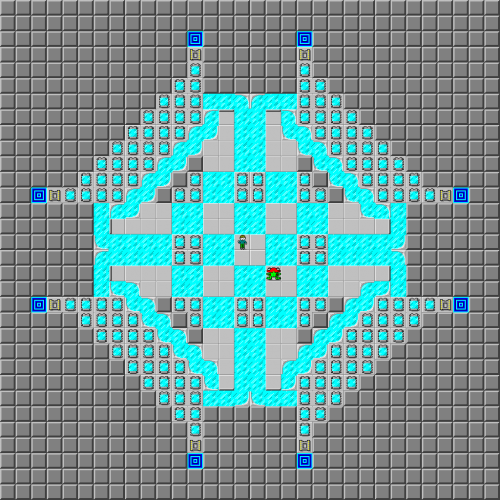